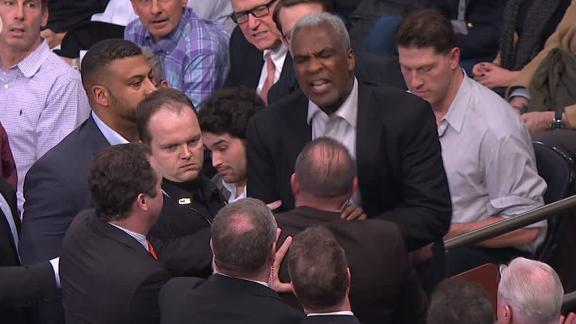 Former Knicks great Charles Oakley was forcibly removed from Madison Square Garden by security and arrested after an altercation in the stands near team owner James Dolan on Wednesday night.

The incident occurred during a stoppage in play as Kristaps Porzingis was shooting free throws in the first quarter against the visiting Clippers. A police source told ESPN that Oakley had purchased his own seat a few rows behind Dolan and was making comments at the Knicks owner. Dolan eventually had security escort him from the arena as fans chanted "Oakley! Oakley!" in support of the popular power forward.

According to an NYPD spokesperson, Oakley was taken into custody after assaulting three male Garden employees who suffered minor injuries and refused medical attention at the scene. The former Knicks great was charged with three counts of assault, a misdemeanor, and one count of criminal trespass, a third-degree misdemeanor.

He was given a desk appearance ticket and will be required to appear in front of a judge at a later date.

"Charles Oakley came to the game tonight and behaved in a highly inappropriate and completely abusive manner," the Knicks wrote in a statement on Twitter. "He has been ejected and is currently being arrested by the New York City Police Department. He was a great Knick, and we hope he gets some help soon."

Knicks president Phil Jackson came out to try to calm down Oakley, who was yelling about Dolan and telling security he wasn't going to move as they handcuffed him outside the tunnel leading to the court.At one point Oakley was on the ground surrounded by police and Garden security.

It's the latest drama surrounding the Knicks and came just hours after first-year coach Jeff Hornacek said he expected as much when he took the job.

"I kind of not was warned, but it was expected that it was going to be something all the time," Hornacek said. "And it's lived up to the billing. It's been something all year."

Oakley played for the Knicks from 1988-98, helping them reach the NBA Finals, but he has a poor relationship with the team because of his criticisms of Dolan, the Madison Square Garden chairman.
The New York Times profiled Oakley in a November 2016 story, with the newspaper reporting that he had "been estranged from the Knicks organization for years, a rift that stems, at least in part, from Oakley's inability to keep some of his more caustic opinions to himself."

In the Times story, Oakley said "at least 15 people" had tried to set up a meeting between him and Dolan, at Oakley's urging.

"He won't meet," Oakley told the Times. "I want to sit down to talk to him. I want me and him in a room. And lock the door. Lock that door! I mean, he can have the police outside the door."