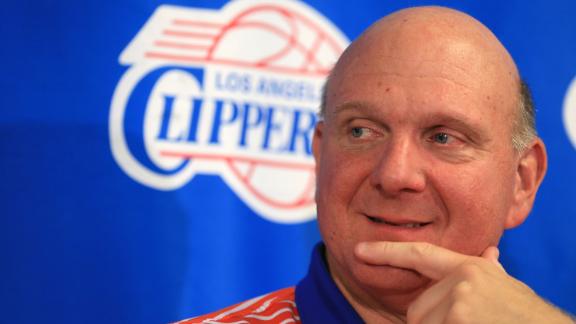 Boosted by Steve Ballmer's league-record $2 billion purchase of the Los Angeles Clippers, the franchise values of NBA teams rose an average of 72 percent in one year, according to new estimates released by Forbes on Wednesday.

The magazine says the Lakers top the league at a $2.6 billion valuation, followed by the Knicks ($2.5 billion) and the Bulls ($2 billion). Even though Ballmer paid $2 billion for the Clippers, Forbes values the team at $1.6 billion, fifth among teams, immediately following the fourth-ranked Boston Celtics ($1.7 billion).

The Brooklyn Nets (who are currently on the market) came in sixth at $1.5 billion, followed by the Golden State Warriors ($1.3 billion), Houston Rockets($1.25 billion), Miami Heat($1.175 billion), Dallas Mavericks($1.15 billion) and San Antonio Spurs($1 billion). Last year, when Forbes valued the Mavs at $765 million, owner Mark Cuban called it "way too low," saying it was worth more than $1 billion.

The Atlanta Hawks, another team currentlyfor sale, are worth $825 million. Michael Jordan hasn't had an easy road as owner of Charlotte's NBA team, but the former great certainly is in a good position financially. What he paid $275 million for five years ago is now worth $725 million, according to Forbes.

Another team that has struggled on the court has also seen its value rise significantly. Josh Harris and his partners paid $280 million less than four years ago for the Philadelphia 76ers. Under his ownership, the team has gone 96-175 (.354), but Forbes said the team is now worth $420 million more than Harris paid for it.

In October, the league announced new television deals with ESPN and Turner that are worth $2.66 billion a year. That's a 186 percent increase from its current TV rights deal, which averages $930 million a year.