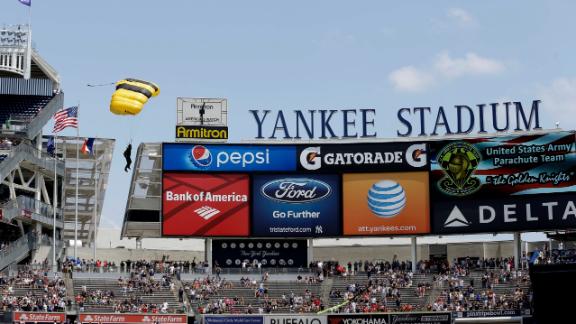 The average Major League Baseball team is worth $1.2 billion, up an astounding 48 percent from last year, according to new valuations published by Forbes magazine on Wednesday.

The driver of the growth, as with all major sports leagues, is the national TV deal, which the magazine notes will deliver an average of $52 million per team per year through the 2021 season.

The New York Yankees, who have held the top spot as the most valuable team in the league for all 18 years the magazine has published the list, are only the second U.S. sports team to top a $3 billion valuation, matching the $3.2 billion that Forbes said the Dallas Cowboys were worth last August.

The late George Steinbrenner bought the team for $10 million in 1973.

Only Real Madrid ($3.44 billion) is worth more than the Cowboys and the Yankees, who are partners on a hospitality business called Legends.

Three other teams have topped a $2 billion price tag -- the Los Angeles Dodgers ($2.4 billion), the Boston Red Sox ($2.1 billion) and the San Francisco Giants ($2 billion). The World Series champions had the greatest one-year jump, doubling their value. The Chicago Cubs round out the top five with a valuation of $1.8 billion, which is what Forbes said the team raised its valuation to when it sold small pieces to minority investors in the offseason.

Despite a trip to the World Series and one of the most significant changes in revenue, the Kansas City Royals ($700 million) rank ahead of only the Miami Marlins ($650 million) and the Tampa Bay Rays ($625 million) as MLB's least valuable teams, the magazine projects.