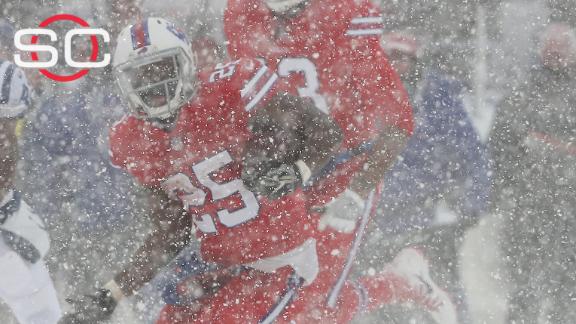 Former NFL running back Larry Johnson told the Washington Postthat he believes he suffers from chronic traumatic encephalopathy, or CTE.

At this time, CTE can only be confirmed after death. Johnson told the Washington Post that his anxiety, paranoia and self-destructive impulses match the symptoms of people who had CTE. He describes brief, intense headaches, the jitters, mood swings, violence and forgetfulness.

He describes "demons" that push him toward rooftop decks, urging him to jump.

He says he believes that he and Aaron Hernandez are something like kindred spirits, cautionary tales.

Johnson, who played at Penn State, was a Heisman finalist in 2002 -- the same year he won the Maxwell, Walter Camp and Doak Walker Awards. He was drafted No. 27 overall in 2003 by the Kansas City Chiefsand was selected to two Pro Bowls, in 2005 and 2006, with the Chiefs. He also spent time with the Cincinnati Bengals, the Washington Redskins and the Miami Dolphins.

But Johnson -- who has been arrested six times, five of which were for various assault charges against women -- had violent tendencies and saw his career pockmarked toward its end. He was waived by the Chiefs in 2009 after he was suspended for "conduct detrimental to the club." His stints with the Redskins and Dolphins were very short.

Johnson last played in the NFL in 2011. He says that he has no memory of two full NFL seasons, and that many of his most memorable plays are hazy memories.

Because of that, Johnson says he is creating a "time capsule" of his football career for his daughter, Jaylen.

"If I can't remember who I was, I've got YouTube; I've got music videos that I'm making for myself, so when I watch these things I can remember," Johnson says. "I'm trying to get these things in order so she knows who I am and what I came from."

Johnson has shielded her from his behavior and says that the only reason he hasn't fully acted on his violent tendencies -- toward himself and others -- is because of his daughter.

"She's, like, a good distraction I have," he says. "She sees something in me that most people will never see."

Working on his capsule for her years ago, he says he was "aware" he was about to destroy himself -- that he could delay it but not avoid it. Johnson says he wasn't contemplating suicide but that he "was preparing to go away to stay."

"A bittersweet thing: I'm going to be free of everything that's holding me down," Johnson says now, and he wonders whether Hernandez experienced similarly intense feelings in his final days. "The same way Aaron [Hernandez] thought, I'm going to be gone from this world, but I'm still going to be able to take care of my child, because that's all I care about."

Johnson said he decided to go public with his concerns in order to open dialogue with other former players he believes may have CTE symptoms.