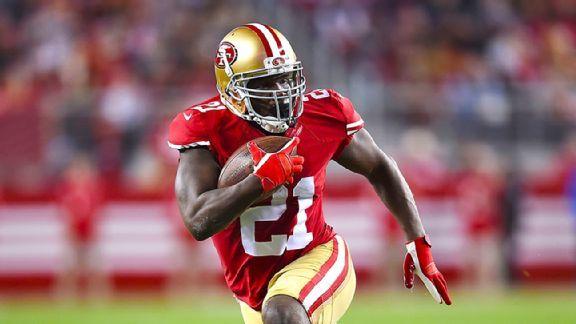 Free-agent running back Frank Gore has told people he will sign this week with the Philadelphia Eagles, according to league sources.

Barring a breakdown in talks, Gore is expected to sign a three-year deal in which $7.5 million in the first two years is guaranteed.

Gore's decision will end an impressive 10-year run with the San Francisco 49ers.

The final price tag, which the two sides still have to negotiate, is expected to come in at less than half of former Eagles running back LeSean McCoy, who is signing a new deal this week with the Buffalo Bills. But the Eagles plan to hand their starting job to Gore, and he has informed other teams that he has made his decision, sources said.

Free-agent cornerback Byron Maxwell told ESPN's Josina Anderson that he will sign with the Eagles when free agency begins Tuesday.

The Eagles were considered the front-runner for Maxwell. However, they had to fend off the Seattle Seahawks, who had been making a last-ditch effort to bring Maxwell back to Seattle, according to sources.

But the Eagles don't have to worry about who their new running back will be. It will be Gore, who will turn 32 in May.

Gore is the type of locker room leader that Eagles coach Chip Kelly covets. Gore is coming off four straight 1,000-yard rushing seasons and has rushed for over 1,000 yards in eight of the past nine seasons. The only season over the past nine in which he failed to reach that threshold was 2010, when he missed five games with a broken hip. Gore is considered an excellent pass protector as well.

A five-time Pro Bowler, Gore was a big proponent of Jim Harbaugh returning to the Niners, who instead "mutually" parted ways with the coach and promoted defensive line coach Jim Tomsula to the head-coach position. Gore said he wanted to see what the 49ers did with the job before deciding his own future.

Maxwell, 27, was a starter all season in 2014, except for three games when he was out with an injury. With quarterbacks trying to avoid throwing at cornerback Richard Sherman, Maxwell was tested often (once every 5.7 snaps) but without much success from opposing quarterbacks, who averaged only an 81.1 passer rating against him.

He had two interceptions and 12 passed defensed in 2014. He played both the outside corner spot and at nickelback last season.