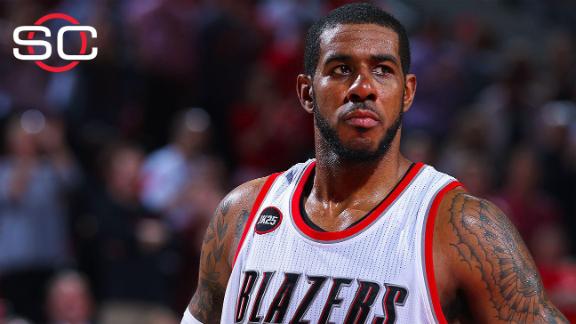 Less than 24 hours after meeting with highly coveted free agent LaMarcus Aldridge, the Los Angeles Lakers are "stunned" to hear that Aldridge was less than impressed by their presentation, a source told ESPN's Ramona Shelburne.

The Lakers were the first to sit down with Aldridge, in a meeting that lasted nearly two hours and had seemed to the Lakers to go "really well," a source told Shelburne.

However, Aldridge was underwhelmed with the meeting, a source told ESPN's Chris Broussard, saying that the presentation focused too much on the off-the-court amenities of life in Los Angeles and not enough on basketball. The Lakers tried to sell Aldridge on the marketing opportunities available in L.A., the Los Angeles Times reported.

Aldridge was described as "engaged" but "noncommittal" during the presentation, reported the Los Angeles Times. A source told the Times that Aldridge has crossed the Lakers off his list of potential destinations. Aldridge's representation tweeted Wednesday that Aldridge had "not made any decisions yet. All reports to the contrary are false & he looks forward to sharing his plans soon."

Lakers starKobe Bryantwas in attendance at the meeting. Aldridge asked Bryant how he thought they would play together and Bryant compared it to his dynamic with former teammatePau Gasol, a source told Shelburne.

Wednesday evening, it appeared the Lakers were moving on without their top target.

It also appeared team president Jeanie Buss deleted a tweet from her verified account that showed a photo with the hashtag "#LAtoLA."

The Lakers' #LAtoLA tweets weren't deleted out of sheepishness, sources told ESPN.com's Dave McMenamin, but rather by NBA request after other teams complained.

The team had cleared the #LAtoLA tweet plan with the NBA's legal department beforehand but still honored the requests to delete the tweet, sources told McMenamin.

According to one ESPN source, the chance of Aldridge staying with the Portland Trail Blazers is "very unlikely."

Another source said the Rockets felt they had a good presentation to Aldridge and were confident in their abilities to sign him.

The Rockets would need to clear significant salary-cap space to sign Aldridge, who would command $18 million in the first year of his contract. The Rockets have committed $60.7 million in salary to the 2015-16 season.

A source close to the talks tells ESPN.com's Marc Stein that the Suns have moved into a contending position alongside San Antonio in the fight to steal Aldridge away from Portland.

The Suns took a big step in appealing to Aldridge on Wednesday by coming to terms with free-agent center and defensive specialistTyson Chandler. Aldridge does not like playing center, and the presence of Chandler in Phoenixas a rim deterrent, sources say, makes the Suns more attractive. Chandler attended the Suns' meeting with Aldridge on Wednesday, a source told Shelburne.

Sources say San Antonio remains the biggest threat to land Aldridge with its championship pedigree, its Lone Star State address (Aldridge played his college ball at Texas) and the persuasive powers of coach Gregg Popovich,Tim Duncan,Tony ParkerandKawhi Leonard, all of whom pitched Aldridge directly at a Wednesday morning meeting.

But the Suns, sources say, have indeed grabbed Aldridge's attention and have moved past teams such as the Lakers and Mavericks who were previously threats to be high in the running for the 29-year-old's services. The Suns would have to strike a sign-and-trade deal or clear out some current contracts on the books to create the needed salary-cap space for Aldridge, but they're naturally prepared to go down those roads if Aldridge tells them he wants to come to the desert.

ESPN.com's Baxter Holmes and Calvin Watkins contributed to this report.

Aldridge unimpressed by Lakers
Chris Broussard breaks down what went wrong for the Lakers during their meeting with free agent LaMarcus Aldridge.