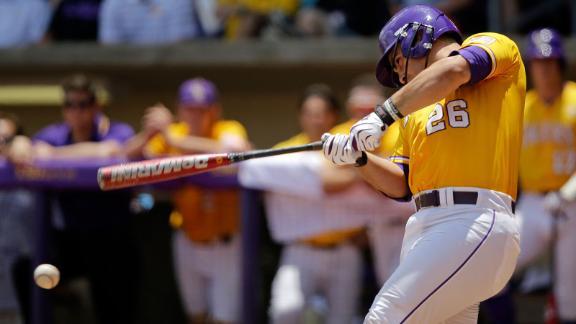 Freshman Taylor Bloom gave up one hit and one unearned run in six-plus innings, and Maryland knocked top-seeded UCLA out of the NCAA tournament with a 2-1 victory in the championship game of the UCLA Regional on Monday night.

Kevin Martir had three hits and scored a run, and closer Kevin Mooney pitched three scoreless innings to lift Maryland (42-22) into a super regional against Virginia, a rematch of the series Virginia won in three games last year.

Martir walked off Grant Dyer (4-2) in the fourth inning and scored on Anthony Papio's double to break a 0-all tie. Nick Cieri's groundout after a walk and Martir's second single made it 2-0 in the sixth.

Bloom did not have a three-ball count until he walked No. 3 hitter Ty Moore to lead off the seventh inning, when Mooney entered. Kort Peterson's one-out single after an infield error drove in Moore to make it 2-1, but Mooney struck out the final two batters of the inning.

Mooney struck out Darrell Miller Jr. with runners on first and third with two outs in the ninth inning. Mooney had three saves in the regional and struck out 10 of 19 batters.

Pinch hitter Elliott Barzilli had an RBI single in the bottom of the 10th inning after TCU rallied from a late seven-run deficit in a 9-8 win over North Carolina State to reach the NCAA super regionals.

Evan Williams led off the 10th for TCU (47-12) with a pinch-hit single, advanced on an errant pickoff attempt by Curt Britt (3-1) and Jeremie Fagnan's sacrifice bunt before Barzilli's clean grounder through the right side of the infield.

N.C. State (36-23) had an 8-1 lead in the eighth after Jake Fincher had a two-run single off TCU closer Riley Ferrell, a likely high pick in next week's amateur baseball draft, and two more runs scored on wild pitches by reliever Preston Guillory.

TCU scored six unearned runs in the bottom half, including runs on a bases-loaded walk, a balk and a passed ball, after second baseman Ryne Willard's error to start the eighth.

Derek Odell led off the TCU ninth with a single, advanced on a sac fly and a balk before coming home on a passed ball on a strikeout.

The Horned Frogs, who went to the College World Series last year, are in the super regionals for the fifth time in seven seasons, and will be at home for the second year in a row. They play Texas A&M next weekend.

Jared Poche allowed six hits and struck out eight in 8 innings and LSU shut out UNC Wilmington on Monday to advance to a super regional for the 21st time in program history.

Poche left the game after a two-out double in the ninth. Parker Bugg recorded the final out to earn the save.

LSU (51-10), which will next face Louisiana-Lafayette, also beat UNC Wilmington (41-18) 2-0 on Saturday to reach the Baton Rouge Region championship game.

Zander Wiel, Rhett Wiseman and Bryan Reynolds homered to lead Vanderbilt's 20-hit attack and the Commodores won the Nashville Regional with a 21-0 rout of Radford.

Vanderbilt tied an NCAA tournament record for largest shutout margin with LSU, a 21-0 winner over Louisiana-Monroe in 2000.

Vanderbilt (45-19) scored in each of the first five innings in winning its fifth regional in six years.

Next up: a Super Regional at Big Ten champion Illinois (50-8-1,) which boasts the best winning percentage in baseball.

A&M (49-12) scored its first two runs on sacrifice flies by Mike Barash in the second inning and Blake Allemand in the seventh. That was all they'd need against Cal (36-21), in its first NCAA tournament since 2011. The Aggies added a run in the eighth on an RBI single by Hunter Melton.

Quincy Nieporte homered and drove in four runs Monday to lead Florida State to an 8-1 victory over College of Charleston and into a berth in this weekend's NCAA super regional at archrival Florida.

After sliding into the postseason on a five-game losing streak, Florida State (44-19) has won its past seven games to capture the Atlantic Coast Conference and NCAA regional crowns.

The top-seeded Hurricanes (47-15) advanced to a super regional for the first time since 2010 with a stunning reversal of their first shutout loss of the season Sunday, a 3-0 defeat to the third-seeded Lions (34-17) that forced Monday's deciding game. It was Miami's largest margin of victory.

The Hurricanes will next face VCU.

Roper's double gave the Illini (50-8) a lead it never relinquished in a four-run fifth inning. Will Krug and Ryan Nagle each drove in a run in the inning. It was the 25th come-from-behind win of the season for Illinois.

Evan Powell's two-run single lifted Louisiana-Lafayette to the super regionals with a 5-2 victory over Rice.

Powell's single to left-center field added to RBI singles in the fourth by Tyler Girouard and in the fifth by Kyle Clement to open up a four-run lead.

Lees earned his third save, pitching 3 innings after relieving Thompson (6-3) in the sixth.

LSU moves past UNCW, on to Supers
LSU beat UNCW 2-0, advancing to the NCAA Super Regional round 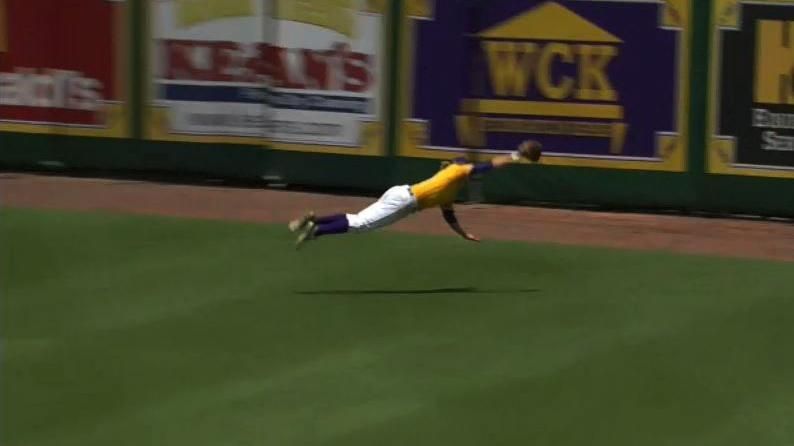