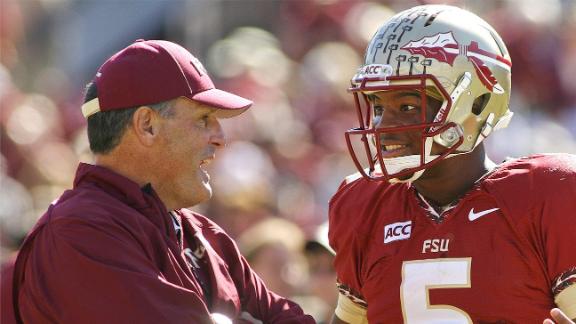 GREENSBORO, N.C. -- Defending national champion Florida State and reigning Heisman Trophy winner Jameis Winston will have targets on their backs in 2014, as the Seminoles are the overwhelming preseason favorite to win the ACC championship and their quarterback is the conference's runaway preseason player of the year.

Miami is the preseason pick to win the Coastal Division crown, something the storied program has yet to do in its first 11 years as a member of the ACC.

Florida State garnered 104 of 108 votes from media members at the Grandover Resort and Conference Center for ACC media days, as the Seminoles enter the campaign aiming for a third consecutive conference title. Winston received 99 of 108 votes as the league's preseason player of the year.

Clemson (two votes) and Virginia Tech (two) were the only other schools picked by voters to win the ACC.

Clemson defensive end Vic Beasley (six), Miami running back Duke Johnson (one), Duke wide receiver Jamison Crowder (one) and Virginia Tech quarterback Brenden Motley (one) were the only other players voters chose as the ACC player of the year.

Six of the Coastal's seven teams received at least one first-place vote to win the division crown, speaking to the parity of that side of the conference.

Reigning Coastal champion Duke (33), along with North Carolina (27), actually received more first-place Coastal votes than Miami (26), but the Hurricanes' 614 total points were enough to put them at the top. Duke finished second, with Virginia Tech coming in third and North Carolina checking in at No. 4.

ACC newcomer Louisville was picked to finish third in the Atlantic behind Florida State and Clemson.