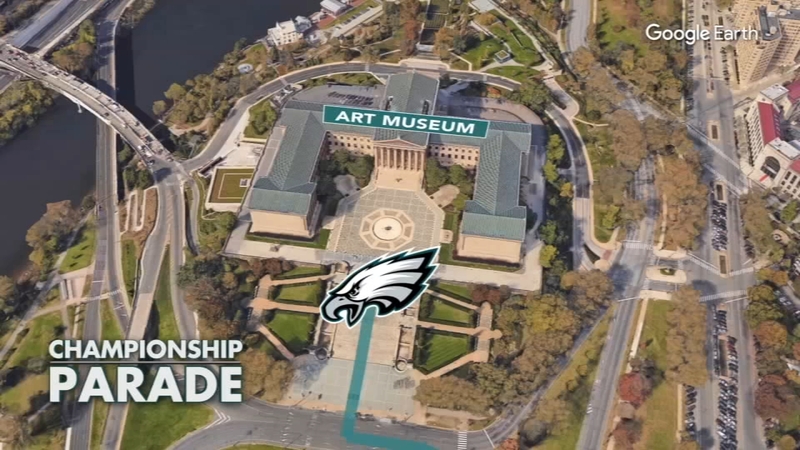 PHILADELPHIA (WPVI) -- The City of Philadelphia has announced the full details about the parade and ceremony on Thursday to honor our Super Bowl Champion Eagles!

TIME: Parade will begin at 11 a.m. at Broad and Pattison and end with a ceremony at the Art Museum.

-Starts at Broad and Pattison in South Philadelphia at 11 a.m.

-Northbound on 16th Street to the Benjamin Franklin Parkway

-Westbound on the Benjamin Franklin Parkway to Eakins Oval

-Ending at Philadelphia Museum of Art

CEREMONY: The ceremony will be on the Art Museum steps at 1 p.m. and is expected to last until 3 p.m.

TRANSPORTATION: SEPTA says rides on the Market Frankford Line and the Broad Street Line will be FREE all day to get people to and from the parade route, sponsored by Independence Blue Cross.

-There are dozens of transit changes released by SEPTA that you need to know. For all of those, CLICK OR TAP HERE.

-For PATCO schedule changes and other plans, CLICK OR TAP HERE.

-For NJ TRANSIT schedule changes and other plans, CLICK OR TAP HERE.

STADIUM COMPLEX:
-Due to security and public safety concerns, parking will not be available at Lincoln Financial Field or the stadium complex.

PPA
-The PPA WILL NOT be enforcing meters, kiosks, or time limits on residential streets on Eagles Parade day.

STREET CLOSURES: There will be a number of street closures in the city:

There are dozens of street closures and parking restrictions that will be in effect.

VISUALS: There will be 14 jumbotrons set up along the route.

CROWD: Mayor Jim Kenney said attendance could be higher than what we saw for the 2008 Phillies World Series parade, which an estimated 1 million people attended.

BARRICADES: The city said the entire route will be barricaded

EMERGENCIES: There will be Philadelphia Fire Department medical tents along the parade route:

Any missing people or children the Philadelphia Police Department come into contact with will take to one of four points along the parade route:

Alpha-numeric "location markers" are posted along the Benjamin Franklin Parkway to clearly and easily identify a location or section (by letter and number, example: CD-1) to facilitate communication in the event of an emergency.

The city attendees to subscribe to ReadyPhiladelphia text alerts. Text ReadyEagles to 888-777 to enroll.

WEATHER: AccuWeather says look for lots of sun with a brisk, cold wind which will average about 12-25 mph. Our high is 34 with wind chills in the lower 20s. Eagles fans should plan on bringing gloves and hats and wear layers beneath those jerseys.

BICYCLE LANE DETOURS: During the parade, several bicycle lanes along Benjamin Franklin Parkway, Broad Street, and streets in the vicinity will be inaccessible. Cyclists are advised to use caution when traveling in the area.

There will be no access to the Schuylkill River Trail from the rear of the Philadelphia Museum of Art on Thursday, February 8th. Westbound travel on the Schuylkill Trail will terminate at Paine Skate Park.