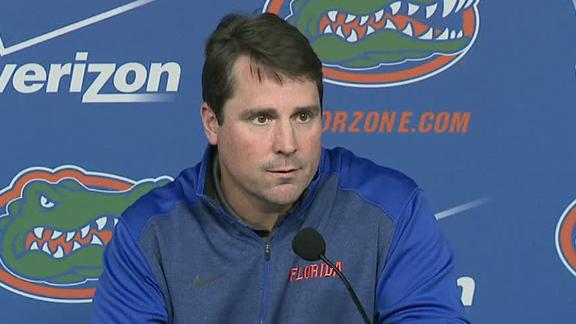 GAINESVILLE, Fla. -- Florida athletic director Jeremy Foley said Monday that the search for the Gators' new football coach will begin immediately and that he'd ideally like a coach in place before Christmas.

"We'll proceed as quickly as we can," Foley said Monday. "There's a lot of work to do, a lot of research to do. We understand how important this hire is to this university."

While Foley wouldn't delve into specifics surrounding the exact qualifications or philosophies he's looking for, he did say that he wants a coach who "has been successful on the offensive side of the ball."

"Obviously, that's what the Gator Nation wants," Foley said. "We see that, and that's what we're certainly going to try and provide for them."

Two offensive minds that aren't expected to appear on Foley's short list are Mississippi State's Dan Mullen and Arizona's Rich Rodriguez. Sources told ESPN's Brett McMurphy on Monday that neither head coach will be considered to replace Will Muschamp.

Two other coaches with ties to the Florida program -- Oklahoma's Bob Stoops and Texas' Charlie Strong -- also wanted to distance themselves from any speculation on Monday.

"That isn't something ... No, all I want to be is a candidate at Oklahoma," Stoops said when asked about the Florida job. "I'm not a candidate anywhere else. I'm finished with that question."

"I have a great job here [at Texas]," said Strong, who served as UF's defensive coordinator from 2003 to 2009. "We have a lot of work to get done here and we're not very pleased with where we are right now. I look at our record and know we could've been a lot better."

Florida currently ranks 88th nationally in total offense (373.3 yards per game) and 63rd in scoring (29.3 points). Both are highs during Muschamp's tenure.

"At the end of the day, we weren't productive offensively," Muschamp said, "and that hurt us."

The school announced Sunday that Muschamp would not return as the Gators' head coach in 2015, but that he would finish out the final two games of the regular season.

Foley said Monday that Muschamp has decided not to coach the team in a bowl game should the Gators (5-4, 4-4 SEC) become eligible with a win in one of their final two games.

During his four years at Florida, Muschamp amassed a 27-20 record, including a 17-15 mark in SEC play. Florida has also failed to finish a season under Muschamp with an offense ranked any higher than 103rd nationally in total offense.

Along with an internal staff, Foley said that he and current Florida president Bernie Machen will make the final decision on the next coach. Future president W. Kent Fuchs, who will replace Machen in January, will also have a hand in the search.

Foley said that he has not made any contact with potential candidates or other athletic directors about the job, and said he doesn't want to interfere with the season still to be played out for other programs.

"We have little time here to do our research, but we're not going to disrupt people's seasons," Foley said.

Florida's 23-20 overtime loss at home to South Carolina proved to be the final blow for the embattled coach.

Foley said that he re-evaluated where the program was after Florida's 42-13 home loss to Missouri on Oct. 18, and that he wanted to see Muschamp build positive momentum and ideally win out.

"Obviously, Saturday was a step back," Foley said.

"We talked about it all year -- we're going to evaluate the season as it progressed, and that's what we did. At the end of the day, we felt it wasn't progressing the way it needed to be."

Foley said that Muschamp's contract will be honored. A source with knowledge of the contract confirmed to ESPN.com's Darren Rovell that Muschamp's buyout will work out to about $6.3 million.

Foley said that the assistant coaches' contracts will also be honored, but if they get jobs elsewhere, Florida would be released from the burden of paying out their contracts.

"The University of Florida respects the job those folks have done for us," Foley said. "They've worked really hard. ... We care about them and we'll treat them right. We've always done that." 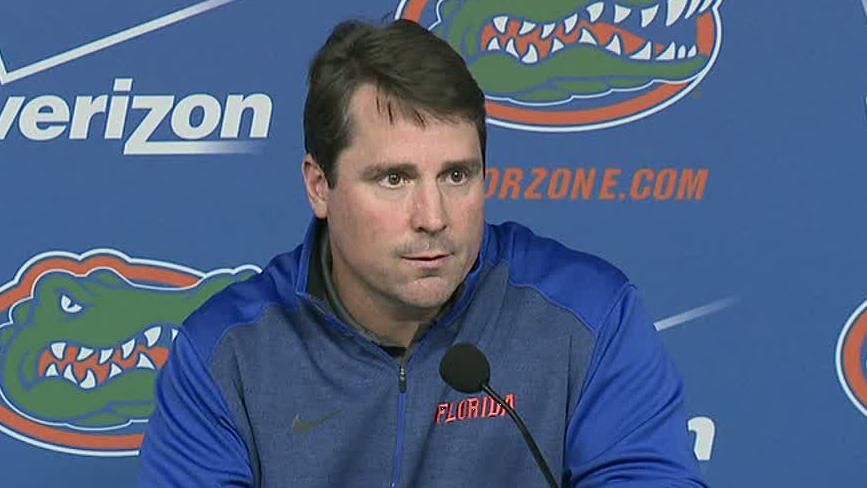 Muschamp: 'I Don't Leave With Any Hard Feelings'
Florida coach Will Muschamp discusses his decision to step down at the end of the season.