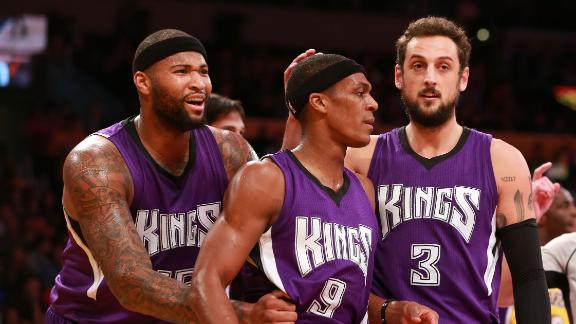 The relationship between Sacramento Kings coach George Karl and center DeMarcus Cousins may have been tumultuous at times, but they certainly seem to be on the same page right now.

In fact, Karl is not only campaigning for Cousins to make the Western Conference All-Star team, he took it a step further by calling his player the best center in basketball.

"DeMarcus has shown at a high, high level that he's an All-Star," Karl told reporters after Cousins scored 36 points and grabbed 16 rebounds in the Kings' 112-93 victory over the Los Angeles Lakers on Wednesday night. "Is there a better center playing basketball right now in the NBA? I don't think there is.

"He's helped us at both ends of the court. ... I don't know anybody that's playing at this level right now, and I hope the NBA recognizes it and gives him an opportunity to play in Toronto [at the All-Star Game]."

Cousins, who has scored at least 29 points in eight of nine games during the new year, was calmly confident when asked if he's the best center in the game.

"That's not even a question," Cousins said. "It's not even about that. I feel I can still improve in so many ways. I feel I can improve a lot on the defensive end. ... I feel like I can make the pass more than I have. Still a lot of areas I need to improve. It's not about that. It's about playing the right way and helping this team get to the next level."

Earlier this season, team members confirmed to ESPN that Cousins directed a profanity-laced outburst at Karl, who then reportedly wanted to suspend his center but was blocked by general manager Vlade Divac from doing so.

The team then had a meeting in November with players airing grievances and complaining about roles, sources told ESPN.

Since that 1-7 start, the Kings have played at a 17-16 clip and are currently eighth in the Western Conference standings.