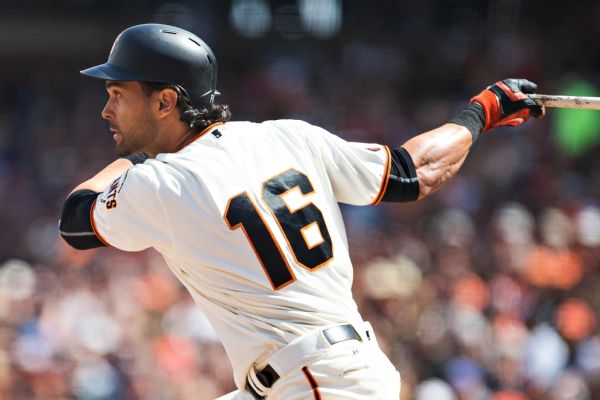 SAN FRANCISCO -- Giants left fielder Angel Pagan body-slammed a male fan who ran onto the field and into the outfield grass at AT&T Park during the fourth inning of a 9-3 win over the Los Angeles Dodgers on Friday night.

"I was just trying to protect myself and protect my teammates," Pagan said. "The guy was getting close to my teammates. He was handing a flower to each and every one of us so it came to my attention: hand me one.

"It was going to take a long time for him to be taken down and [Madison Bumgarner]was on a roll. So I wanted for the game to keep going."

Another fan -- a female -- was taken down by security in shallow right field. The two, dressed in Dodger Blue and offering what appeared to be white puffballs, were removed.

Giants manager Bruce Bochy said players get nervous when they see fans on the field.

"You don't know what these guys have in their hands or whatever," Bochy said. "Buster [Posey]was concerned and Bum, he bowed up, too. He didn't know what to do.

"I think Angel just felt like he had to stop things at that point because there was nobody close to him," Bochy said, referring to security. "My preference is he stay away -- you never know what can happen there, player gets injured trying to help out. But that's Angel. He was going to help the cause."

The male first approached catcher Posey, who with his left arm shoved the man to the ground. The man jumped up and ran, and third baseman Gordon Beckham swiped at him before the fan took off into left field.

"After I saw him getting too close to Buster that he had to push him away, I just thought that my teammate could be in danger," Pagan said. "So I had to do something because you never know what they've got on their body. So I just wanted to tackle him. I mean, I didn't want to harm him or anything. But I just wanted to make sure I helped the security people as well as protect my teammates."

Pagan offered a hand as if to accept the round white object before throwing both arms around the man, twisting him and throwing him to the ground.

Pagan received a roaring ovation from the sellout crowd when the half-inning ended, and he tipped his cap.

"It's just weird whenever anybody comes on the field," Posey said. "You get a little uneasy. He probably should have been flagged for the flop, though."