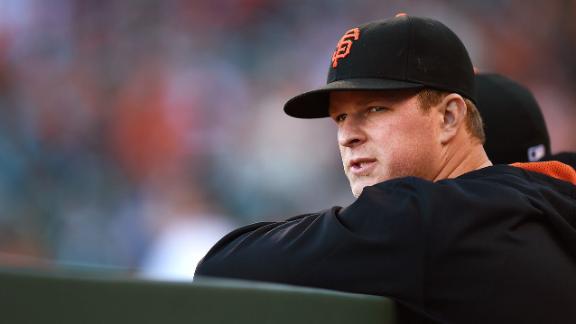 Matt Cain will miss his first start of the season with a flexor tendon strain and is likely headed to the disabled list,San Francisco Giantsmanager Bruce Bochy said Monday night.


An MRI revealed that Cain does not have ligament damage in his right forearm, and that his issue is "more like a two-week thing," Bochy said after the Giants' 5-4 win over the Arizona Diamondbacks.

Cain will be the second Giants starter to be scratched from his opening start, as Jake Peavy won't pitch Tuesday because of back stiffness.


Ryan Vogelsong will start against Arizona on Tuesday, and Tim Lincecum and minor leaguer Chris Heston are possibilities to replace Cain on Wednesday.


"It doesn't sound like it should be major," Cain told reporters. "It sounds like it's just a strain. We'll take it as it is and let it heal up. The trainers seem pretty positive."


Bochy said Cain mentioned tightness in his forearm after his last spring start Friday, when he threw four scoreless innings against the Athletics.