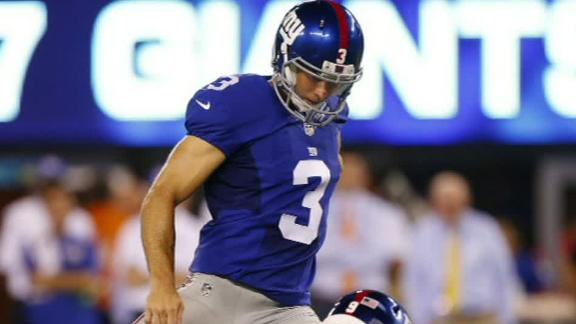 New York Giants owner John Mara on Wednesday defended the team's decision to re-sign Josh Brown, saying his club was "comfortable" with the facts in the 2015 domestic violence allegations against the kicker.

"All I can tell you is that where aware of all the allegations and I believe all the facts and circumstances and we were comfortable with our decision to re-sign him," Mara said Tuesday.

Mara said domestic violence is not a "black or white" issue.

"You very rarely have a Ray Rice video," he said.

Mara noted that "the charges were dropped within a couple days" after Brown's arrest in 2015 following an incident with his now ex-wife.

"Nothing has happened in the meantime to make us question that decision," Mara said.

The Giants owner said domestic violence is "an issue ... that we take very seriously here."

"Everybody in this building, players and employees alike go through a training program on issues like domestic violence and sexual abuse and DUI," he said.

"We have worked very closely for many many years, long before this became a hot-button topic with an organization called My Sister's Place, and this is an issue that is very personal to a lot of us."

Last week, the 37-year-old Brown was suspended one game for violating the league's conduct policy. The ban stems from the 2015 domestic violence case in May of that year.

The Giants signed kicker Randy Bullock earlier this week in the wake of Brown's suspension. Bullock said he was told he was signed to compete with Brown.

Molly Brown, the Giants' kicker's ex-wife, told police that he had been physically violent with her on more than 20 instances over the past several years, but the NFL said last Friday it arrived at a one-game suspension for him, in part, because the league was unable to gather information from Molly Brown and law enforcement officers during its investigation.

Last week, Josh Brown said he informed the Giants of the 2015 charge on the day of the incident, and a team spokesman confirmed they knew of that incident.

The Giants re-signed Brown this offseason to a two-year, $4 million deal.

Mara said it would have been an easy decision not to re-sign Brown but, "... I'm trying to be fair to him as well. I think he's trying to do the right thing. He deserves an opportunity to show that he can do that."