Giants star Odell Beckham Jr.: Will continue to be 'who I am' 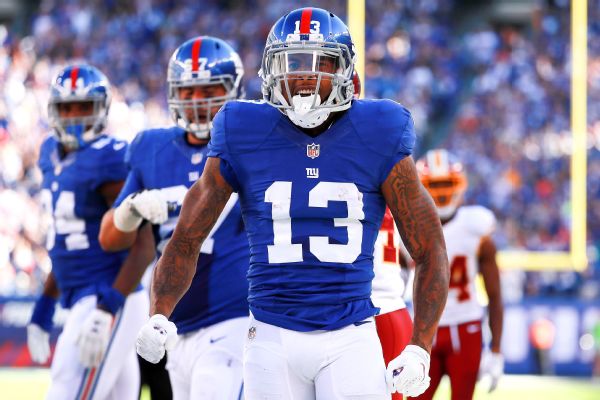 ESPN
By Jordan Raanan
EAST RUTHERFORD, N.J. -- Odell Beckham Jr. doesn't plan to make any major changes after his sideline outburst in Sunday's loss to the Washington Redskins, even after Giants coach Ben McAdoo said publicly that the receiver needed to control his emotions better in order to become less of a distraction.

"Nah, I'm not really ... I'm in a great place right now," Beckham said Thursday ahead of the Giants' visit toMinnesotaon Monday night. "Mentally, physically, spiritually, there is not really much that bothers me at all, to be honest. So I'm going to go out and play football the only way I've ever known how to play, try my best to be the best teammate you possibly can.

"At the end of the day, you play for the guys that wear the jersey. They're the ones who take the field with you, who you share the blood, sweat and tears with. I'm just going to go out and be who I am."

Beckham then was asked whether he was concerned that he could become a distraction, as McAdoo had said earlier this week.

"He said, she said," Beckham said. "I'm not really concerned about anything but the Minnesota Vikings."

The Giants wide receiver slammed his helmet against the kicking net and was seen yelling while stomping up and down the sideline after a fourth-quarter interception against the Redskins. Quarterback Eli Manning went over to calm him down, and McAdoo said he twice had conversations with Beckham during the game.

Many of Beckham's teammates didn't know about the outburst until later; they were busy trying to win a close game.

McAdoo thought the situation could have been handled better.

"He needs to control his emotions better and become less of a distraction to himself and to his teammates," the first-year coach said Monday. "It's our job to help him with that process and maturing."

But Beckham appears intent on being true to himself. That means playing with the same emotion that he believes helps make him great.

This is the same message that veteran cornerback Dominique Rodgers-Cromartie shared with the Pro Bowl receiver when they talked Wednesday. But it also had an added twist.

"I told him to continue to be you. Never lose that fire," Rodgers-Cromartie said. "But on the sideline there are a bunch of guys and they're already down and, if a guy looks at you the way we look at you as a leader, keep it in control until we get to the locker room. Throw your helmet all across the locker room so nobody can see. That's fine. In an atmosphere like [the sideline during a game], keep your cool."