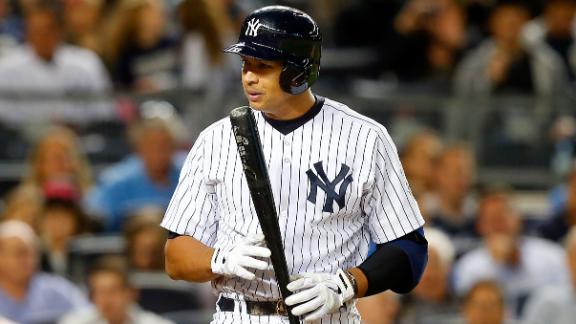 TAMPA BAY, Fla. -- Alex Rodriguez may be pushing 40 and might have 654 homers on his rsum, but when he arrives in camp, he is basically going to be treated like a rookie attempting to make the team.

Rodriguez, coming off the largest suspension in baseball history and with $61 million over three years owed to him, will be given nothing and must earn playing time, according to his manager, Joe Girardi.

"He's on our roster, but you have to prove yourself, in a sense, for playing time and how you fit in," Girardi said during his "state of the Yankees" news conference on the days the team's pitchers and catchers reported. "We really haven't seen him play in two years and we don't know exactly where he is at, so that's something he has to prove and earn."

The Yankees have named Chase Headley as the team's starting third baseman. The plan in spring is for Rodriguez to receive the majority of his at-bats as designated hitter. Girardi said he won't start to really judge Rodriguez until around the middle or the end of camp.

Besides having his 40th birthday looming in July, Rodriguez has had two hip surgeries. During his career, he has repeatedly turned to performance enhancing drugs as a crutch. If he were to do that and were caught, he would be banned from baseball and forfeit the remainder of his contract, raising the question of whether Rodriguez mentally can play without PEDs.

Girardi is expecting a media circus surrounding camp and acknowledged that Rodriguez will likely be the focus of the spring. Girardi's attitude is "Been there, done that."

"One of the things that I learned in 1996 [when I joined the Yankees as a player,] that this is a different place," Girardi said. "It is different when you put on a New York Yankee uniform. You are with one of the most recognizable companies in the world. With that, comes a lot of media coverage, a lot of questions that you have to answer. Some players, it takes some time to adjust. Some players adjust really quickly and some don't adjust so well. That is part of the gig here. The one thing that is going to happen, the new players that are here, that aren't used to this, they are going to get it right away. They are going to get baptized really quickly."

To speed up Rodriguez's return to the game, Girardi expects to have him play a lot. The manager might even send Rodriguez to minor league camp to receive eight at-bats in a game to try to speed up the process.

The Yankees have discussed trying Rodriguez at first base during the spring. Girardi and Rodriguez had an initial conversation during the winter about the move, but Girardi wants to hold off any decisions until he can look Rodriguez in the eye.

"I can have that conversation over the phone, but I can't see his face," Girardi said. "I can't see his reaction to it. I want to have it in person. Everything he has said, he has said he is willing to do anything to help us. That's what you want with your players."