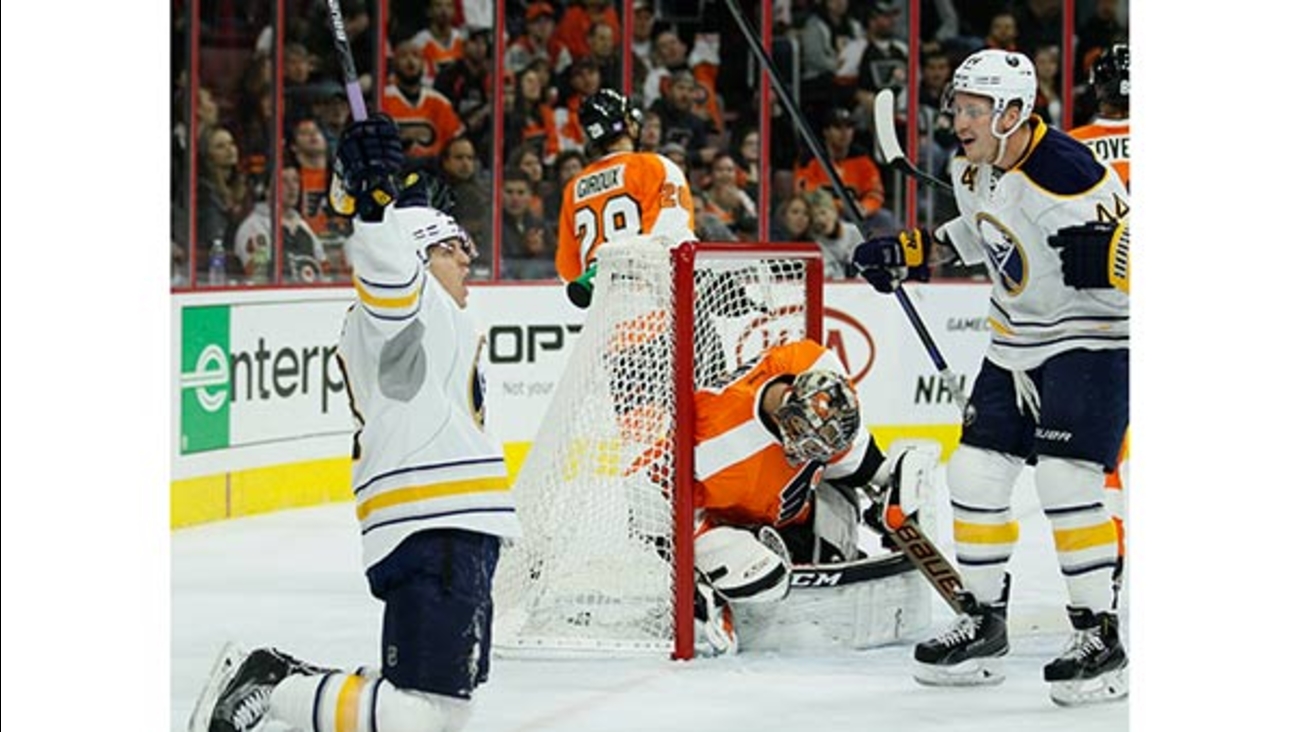 PHILADELPHIA (WPVI) -- Zemgus Girgensons scored on a breakaway with 2:31 left in overtime to lift the Buffalo Sabres to a 4-3 victory over the Philadelphia Flyers on Tuesday night.

Jake McCabe, Tyler Ennis and Jamie McGinn scored for Buffalo, which snapped a two-game skid while winning for the first time on the road in its third try.

After the Flyers turned it over in their end, Carlo Colaiacovo sent a long pass to a wide-open Girgensons, who beat Steve Mason through the five-hole.

Buffalo played its first game without top-line winger Evander Kane, who will miss 4-to-6 weeks after injuring his left knee in Saturday's 4-3 loss to the Devils.

Michael Raffl returned to the ice for Philadelphia. He was accidentally struck in the head by the Rangers' Jarret Stoll on Saturday night, felt dizzy and then collapsed on the Flyers bench.

It looked as if Buffalo was going to win it in regulation, but Schenn netted his second goal of the game with 53.2 seconds left in the third period to force overtime.

With Mason out in favor of an extra attacker, Claude Giroux sent a wrist shot toward the goal. Schenn deflected it off goalie Chad Johnson and over his right shoulder.

McCabe snapped a 2-all deadlock when his wrist shot from the point went through traffic and got past Mason's left pad with 10 minutes, 22 seconds left in the third period.

The Flyers had tied the game just over one minute earlier when Schenn tapped home Scott Laughton's cross-ice pass from just in front of the crease with 11:46 to play.

Ennis put Buffalo on the scoreboard with a highlight-reel goal 6 minutes into the contest. From behind the net, Ennis first deked around Giroux and, while falling to his knees, reached around the net and caromed a backhand shot off Mason's left pad and into the net.

The Sabres went in front 2-0 on McGinn's power-play tally with 9:21 left in the first. Brian Gionta passed from center ice to the left wall to Johan Larsson, who fired the puck to the front of the crease where McGinn tapped it home.

Buffalo appeared to take a three-goal lead two minutes later, but Marcus Foligno's apparent goal was disallowed because a replay review confirmed the officials' ruling on the ice that Foligno kicked the puck past Mason.

Philadelphia got on the board with 5:40 left in the period when VandeVelde fired a wrister past Johnson's glove side from the slot. Notes: Philadelphia honored retired former Flyers standout Danny Briere in a pregame ceremony. ... Tuesday was the first of three meetings this season between the teams, who will play next on Friday night in Buffalo. ... Pierre-Edouard Bellemare suffered a lower body injury with 5:52 remaining in the first period and didn't return.
Related topics:
sportsaction news sportsphiladelphia flyers
Copyright © 2021 WPVI-TV. All Rights Reserved.
More Videos
From CNN Newsource affiliates
TOP STORIES