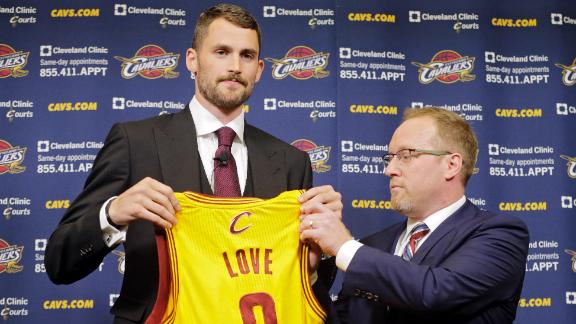 Minnesota Timberwolves owner Glen Taylor said he thinks Kevin Love may get exposed for defensive liabilities now that he has joined the high-profile Cleveland Cavaliers.

"I think where maybe he got away with some stuff not playing defense on our team, I'm not sure that's how it's going to work in Cleveland," Taylor said on ESPN Radio 1500 AM in the Twin Cities on Tuesday. "I would guess they're going to ask him to play more defense and he's foul prone."

Taylor also said he thinks Love may get the blame if the Cavs have some struggles.

Love and his representatives told the Wolves in June that he wanted to be traded this summer because he planned to leave the team in free agency next year. Love came to the Cavs without having a contract extension in place but both sides said Tuesday they are hopeful he will remain with the team long-term.

"If they sign him to a five-year contract like they're thinking about, that's a big contract on a guy that's had some times he's missed games," Taylor said, perhaps referencing how Love twice broke his hand while playing for the Wolves and costing him to miss most of the 2012-13 season.

When asked about his time with the Wolves, where he played six seasons but never made the playoffs, Love said Tuesday that he felt he had a good relationship with Taylor.

"I loved my time there, the people of Minnesota were great," Love said. "I really developed a lot of relationships all the way down through the organization through ownership."

Taylor repeatedly said in interviews over the last several months that he didn't want to trade Love and hoped he would start the season with the team. But Love's trade demand ultimately forced the Wolves' hands.