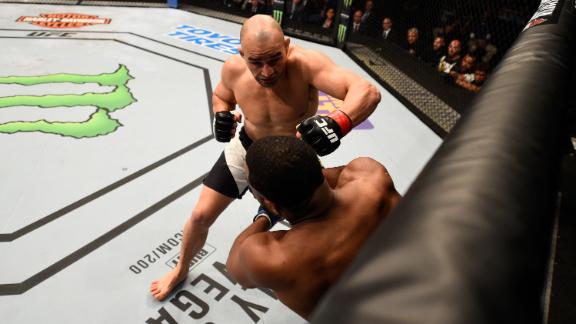 Evans openly admitted Teixeira was a tougher opponent than Rua would have been -- and that proved to be the case in Saturday's main event, as Teixeira walked Evans (19-5-1) into the fence and unloaded a left hook that dropped him to his knees. As the 36-year-old held himself up in a knelt position, Teixeira closed in with the finishing blow, a straight right hand to the jawline. Evans went out cold from the blow.

"This fight was five rounds, but I didn't want to come here and do footwork," Teixeira said. "My way to fight is finish. [I'm] like [former heavyweight boxer] Mike Tyson. I take care of business."

Originally from Brazil and now fighting out of Connecticut, Teixeira entered the night as the No. 7-ranked light heavyweight in the world, according to ESPN.com. He is 8-2 in the UFC and has fought for the championship once. Two years ago, Teixeira fought Jon Jones at UFC 172 and lost via unanimous decision. He lost every round.

Teixeira has looked good in his recent three-fight streak, however, picking up wins against Ovince Saint Preux and Patrick Cummins. He never allowed Evans to pick up any momentum on Saturday, as he immediately took the center of the Octagon and kept Evans on his back foot. Evans fired back a few left hooks in defense, but Teixeira was relatively in control from start to finish.

After the fight, Teixeira called for a bout against Anthony Johnson, who is actually a teammate of Evans at Blackzilians in Boca Raton, Florida. Johnson was sitting cageside for the fight and smiled upon hearing the invitation.

"I feel right at the top," Teixeira said. "'Rumble' Johnson is waiting around for Jon Jones and Daniel Cormier. He doesn't want to wait around. Let's dance, baby. Let's make some money."

Johnson (21-5) is widely viewed as the next No. 1 contender at 205 pounds, but he would have to wait for the shot. Cormier, the defending champion, is currently recovering from a leg injury. Jones is scheduled to fight Saint Preux next week at UFC 197 for an interim title.

According to Fightmetric, Namajunas was actually out-struck in the fight 94-64, but she appeared to land the harder shots and managed to take Torres (7-1) down twice. She did her best work in the second round, catching Torres with several front kicks and left hooks. In the final minute of the bout, she took Torres down to close out a very close final round. Torres nodded and applauded for Namajunas as the scores were read.

Namajunas, 23, picks up her third consecutive win. Her only loss in the UFC came in the promotion's inaugural 115-pound title fight in December 2014. Since then, Namajunas has defeated Angela Hill, Paige VanZant and Torres.

Lightweight contender Khabib Nurmagomedov (23-0) dominated short-notice opponent Darrell Horcher, finishing him witha second-round TKO. It was Nurmagomedov's first appearance in two years, due to injury. Originally scheduled to fight Tony Ferguson, Nurmagomedov was somewhat conservative at the start of the bout but found his confidence midway through the opening round when he slammed Horcher to the canvas. The Dagestani proved to be light-years ahead of Horcher on the ground, taking his back in the first and again in the second, where he landed punches until the fight was stopped at the 3:38 mark. He out-landed Horcher in total strikes 121-17. Nurmagomedov holds a decision victory over current 155-pound champion Rafael dos Anjos.

Featherweight Cub Swanson (22-7) dropped Hacran Dias twice en route to a unanimous decision win (29-28, 29-28, 29-28). Swanson, out of Albuquerque, New Mexico, floored Dias with a left hook in the second round and later with a left head kick in the third. Dias survived both but ended up taking further damage on the ground from Swanson punches. The win snaps a two-fight skid for Swanson, who had won six in a row before recent struggles. Dias falls to 3-3 in the Octagon.

Lightweight Michael Chiesa (14-2) submitted grappling specialist Beneil Dariush (12-2) at 1:20 of the second round via rear-naked choke. Chiesa picked up the win after losing the first round, as Dariush had success early with leg kicks. Early in the second, however, he took Dariush's back during a scramble and slid his right arm across his face. Chiesa's arm never made it under Dariush's chin, but his squeeze was enough to produce the tap. Chiesa, a former winner of "The Ultimate Fighter" reality series, improves to 7-2 in the UFC. He called out highly ranked Tony Ferguson following the victory.

Bantamweight John Dodson (18-7) needed just 47 seconds to finish Manny Gamburyan (15-9) via TKO. A former two-time flyweight title challenger, Dodson hurt Gamburyan with a straight left and followed with a series of uppercuts after Gamburyan knelt to the floor. The victory is the fastest knockout of Dodson's career and marked his first appearance at 135 pounds since 2011.