GM: 'Can't expect' much from A-Rod 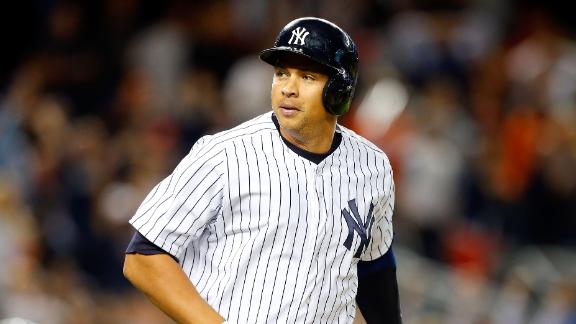 Cashman confirmed Tuesday that Chase Headley will be the Yankees' starting third baseman after he and the team agreed to a $52 million, four-year contract this week.

Coming off a season-long suspension for violations of baseball's drug agreement and labor contract, Rodriguez will be relegated to a DH role in manager Joe Girardi's lineup. Cashman said the three-time MVP will have to compete with Martin Prado for time as Headley's backup at third.

"I can't expect Alex to be anything," Cashman said during a telephone interview with The Associated Press. "I've got to think the worst and hope for the best. Even before the suspension, he wasn't the same player at third base on the defensive or offensive side. And that was before the suspension.

"And now he's been out of the game for a year. He's approaching 40 years of age. And just to automatically assume given his circumstances that he'll be able to plug right in, play third as an everyday guy and hold up and be productive, I think that would be dangerous thinking from my perspective, in the seat I'm sitting in."

Rodriguez turns 40 in July and has not played a full season since 2007 because of leg injuries, operations on both hips and the suspension.

"So given all that circumstance, we look forward to him hopefully solidifying himself as a tremendous DH for us, and if he shows he has retained athleticism, then he can play third as a choice when Joe decides to give Headley a rest," Cashman said. "He can compete for Joe's thought process, whether it's Prado swinging over or Alex playing third."

Cashman said he has not spoken with Rodriguez about his new role.

"I don't need to. I've been very consistent with my conversations publicly from October on," he said. "I have not heard from Alex on any of that, and I know he reads all this stuff."