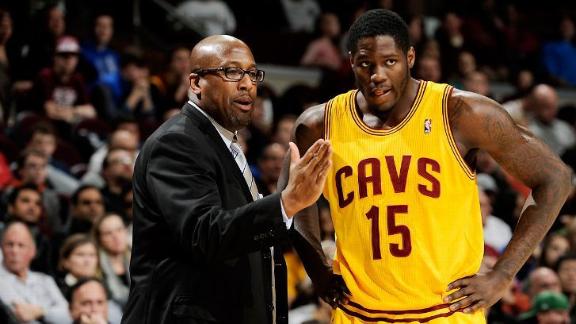 INDEPENDENCE, Ohio -- Mike Brown's relationship with All-Star point guard Kyrie Irving didn't grow. They got along, but had their issues.

However, any differences Brown had with his best player didn't get him fired for a second time by the Cavaliers.

That's the point made by general manager David Griffin on Tuesday, strongly denying that Irving had any direct involvement in the decision to replace Brown. The coach was dismissed on Monday -- nearly a month after the Cavs finished a disappointing 33-49 season.

"Any, any insinuation that Kyrie had anything to do with this decision is patently false," Griffin said, his voice rising. "It's unfair. He was not counseled on this decision, nor was he counseled on the previous coaching decision. It's a completely unfair assertion and one that I want everyone to understand very clearly."

Griffin then pounded his hand on the table for effect.

"That is not a narrative that we are going to go with," he said.

Irving, who will be playing for his third coach in four NBA seasons, and Brown rarely seemed on the same page in their year together. While Irving's defense improved, there were too many times when he was a liability. Also, Irving and guard Dion Waiters struggled during their time on the court and the pair had some off-court issues under Brown's watch.

It's understandable that Griffin defended Irving. After all, the 21-year-old is Cleveland's top player -- a potential superstar in the making -- and the Cavs can offer him a maximum contract extension this summer. The team doesn't want to create any unnecessary turmoil with Irving, who has repeatedly sidestepped any questions about whether he intends to accept a long-term deal in Cleveland.

Brown's first stint with Cleveland ended in 2010, the summer when the Cavs were knocked out in early the playoffs and LeBron James left for Miami. And while Brown isn't solely to blame for the Cavs missing the playoffs for the fourth straight year despite being in the top-heavy Eastern Conference, he took the fall.

Griffin, who was promoted by owner Dan Gilbert after serving as the club's interim GM since Feb. 6, said the decision to fire Brown was made collectively.

Brown did improve the Cavs' record and they made a major leap defensively, jumping from last in the league to 12th in defensive field-goal percentage. But he couldn't get them back into the postseason, and players grumbled about his offense.

"Nothing's all one person's fault," he said. "I do think there's accountability to be shared everywhere. When we came into the season there were probably things we could have done better as a front office to set the table as well. This was a collective approach this season. We made progress collectively in some ways toward the end of the year and we fell short collectively in some ways. So this was absolutely not the blame of anyone. It's shared by everybody."

Griffin has already begun the search to find Brown's replacement. He did not reveal the names of any possible candidates and said there is not a clear front-runner.

Griffin also has worked with Mike D'Antoni, and George Karl, a current ESPN analyst, could get consideration.

Griffin said the search will not be limited to pro coaches and there is no timetable to find Brown's successor.

Griffin said Gilbert, who has fired four coaches and replaced three GMs since buying the Cavs in 2005, will be heavily involved in the coaching search.

"Dan does have a reputation as a very hands-on owner, because our ownership group is very involved," he said. "This will be a collaborative effort. I will not make any decision alone. But I will absolutely be leading this process, and I'm really excited about building a relationship with that coach.

"As I've said before, you're only as strong as that relationship. That bond is going to be very strong."