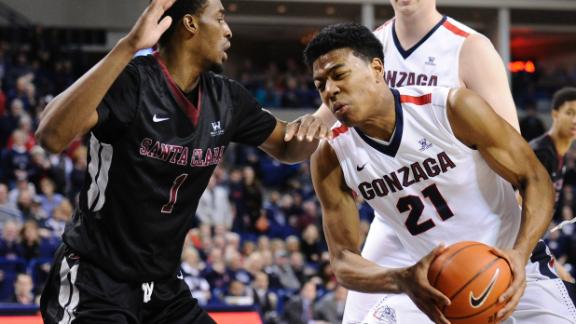 Gonzaga is No. 1 for a second straight week in The Associated Press college basketball poll following a week in which all but four of the top 10 teams lost at least one game.

The Bulldogs (24-0), the only remaining unbeaten team in Division I, received 59 first-place votes from the 65-member national media panel on Monday. Villanova (22-2) moved from fourth to second after receiving the other six No. 1 votes.

Kansas, which saw its 51-game winning streak at Allen Fieldhouse end over the weekend, held at third, while Louisville jumped from sixth to fourth.

Oregon, coming off of its impressive win over Arizona, went from 13th to fifth. Baylor, which lost twice last week, dropped from second to sixth.

Wisconsin was seventh, followed by North Carolina, Arizona and UCLA.

Xavier and SMU are the week's newcomers, replacing Notre Dame and Northwestern.

Hart, DiVincenzo lead Villanova past St. John's
Josh Hart scores 26 points while Donte DiVincenzo adds 20 off the bench in the No. 4 Wildcats' 92-79 win over the Red Storm.