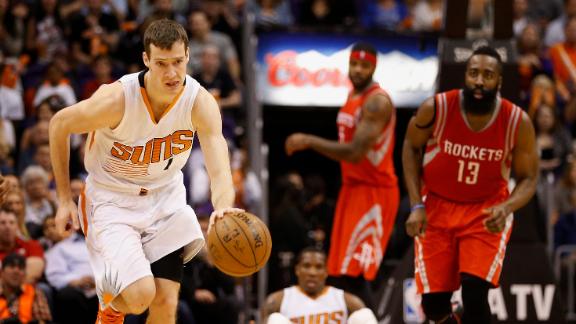 Sources said that the Rockets, who let Dragic go in free agency in the summer of 2012 but have him high on their list of free-agent targets this summer, are prominent among the teams hoping to engage the Suns in serious discussions about Dragic before the league's annual trade buzzer next week.

The Lakers, meanwhile, also have coveted Dragic for some time and likewise are said to be intent on testing the Suns' resolve when it comes to their Slovenian point guard. Sources say L.A. plans to chase Dragic this summer anyway with an aggressive four-year offer that would be valued as high as an estimated $80 million if it approaches max-contract territory.

Other suitors for Dragic are sure to emerge, too, even though the Suns' first choice is believed to be pursuing other trades that balance out their guard- and wing-heavy roster and re-establish Dragic as more of an offensive focal point.

"I would take the fifth, generally, on any of these specific trade rumors," Suns president of basketball operations Lon Babby told the Arizona Republic. "What I would say is I expect us to be active. And what I mean by that is we're not going to just sit here and wait for the phone to ring.

"We'll be initiating calls to every team, and taking the temperature of what's out there and what's available. And it wouldn't surprise me at all if we do something between now and next Thursday."

The Suns' general stance in recent weeks and months has been to rebuff all trade interest in Dragic, who is widely regarded as their best player and the closest thing they have to a face of the franchise. But sources say Phoenix has likewise been trying all season to ascertain its chances of re-signing Dragic in July and might feel some pressure to consider trade options in the coming week if fears grow that the team could lose Dragic without compensation in free agency.

The Suns re-signed Eric Bledsoe to a five-year, $70 million contract late last summer and added Isaiah Thomas to their deep backcourt in July on a three-year deal worth $27 million. Those moves have encouraged Dragic's suitors around the league to try to pry him away with various trade offers, which the Suns have roundly rejected to this point. But the presence of two other quality point guards on the roster does at least give Phoenix plenty of cover at point guard if it changes course and abruptly decides that it has to part with Dragic now or in July.

While the Suns may be forced to break up their trio of point guards, Thomas said the team tries not to worry about trade rumors.

"You just try not to focus on it because it's a business," Thomas, a participant in the All-Star Skills Challenge, said Friday. "There's going to be rumors all over and you never know if its true or not. You just gotta continue to be a professional and be ready."

In January, Dragic told the Houston Chronicle that he wouldn't dismiss the Rockets in free agency even after they had him on the roster and then let him go, deciding that a four-year, $30 million contract offer from the Suns -- which now ranks as one of the league's best bargains -- was too rich to match.

"Oh, no," Dragic told the newspaper. "Nothing like that. Every team in the NBA is an option to me, because it is a privilege to play for any team in the NBA. When the time comes, I'm going to sit down with my family and my agent and try to make the best decision for myself."

Last season, Dragic was seen as the league's biggest All-Star snub and eventually was named to the All-NBA third team and won the most improved player award.

But he was scarcely mentioned as an All-Star candidate this season and has publicly acknowledged some frustration this month with his long spells playing off the ball alongside two other point guards.

That only figures to embolden teams to try to pursue Dragic via trade now, since both Bledsoe and Thomas are under contract going forward.

"I think our roster balance is a little off, and that's my fault," Suns GM Ryan McDonough told 98.7 FM in Phoenix this week. "We are a little too backcourt-heavy, especially in terms of guys who, you know, I think you'd define primarily as scorers in the backcourt.

"So I think at some point we'll need to balance that out, try to get a little more size, a little more frontcourt scoring and rebounding."

Phoenix lost five of its last six games heading into the All-Star break and has seen its lead over No. 9 Oklahoma City dwindle to a half-game in the Western Conference playoff race.

Does Goran Dragic Fit With Rockets?
Scoop Jackson talks to Cary Chow about the Rockets' interest in trading for Goran Dragic.