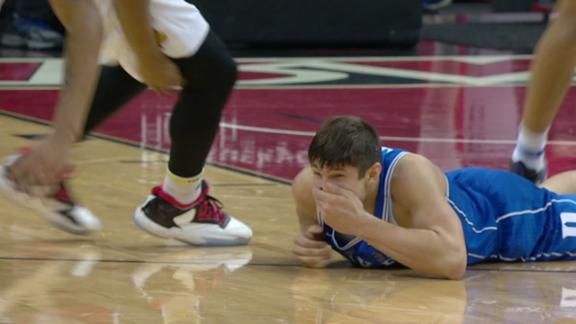 Allen, of course, has been the target of much criticism for a series of tripping incidents he has been involved in over the past year, the first coming against the Cardinals and forward Ray Spalding last February.

But Pitino, speaking after his No. 14 Louisville team beat Duke on Saturday 78-69, called Allen "a terrific young man."

"I think it's a reflex, like someone throwing an elbow, because he's a highly, highly intelligent young man, so why would you do it?" Pitino said of Allen's incidents. "I think he's a terrific young man who made a mistake, made three of them. I think it's a reflex action, when he does something wrong, he'll lunge out or trip someone out."

They rained boos on Allen, with the student section frequently chanting "Sweep the leg!'' in reference to a line from the movie "The Karate Kid.'' But other than a few signs -- including a yellow-and-black one that said "Caution Tripping Zone'' with a falling stick figure -- the junior got off relatively light.

The game wasn't pain-free for him, though. Allen got tangled up with Louisville's Donovan Mitchell early in the second half, with both players falling to the court and Allen coming up holding his mouth after he appeared to have been slapped.

ACC officials said they reviewed the play and determined the slap was inadvertent.

As for the booing, Allen said after the game that his focus was on the court, not what was being said or written off of it.

"I don't think about it,'' Allen said. "I only worry about the guys that are playing the game, not the people that are watching.''

Jeff Capel, Duke's acting head coach with Mike Krzyzewski out due to back surgery, wasn't surprised by Allen's reaction.

"I don't think it bothers him," Capel said. "Look, you're on the road. That's supposed to happen. Unless something's changed in college basketball, if you're a good player -- and Grayson is a really good player -- when you go on the road, the opposing team is supposed to say stuff. [That's] if you have a good crowd. And I think these people have a good crowd. I think most of the places, the venues that we will play in in the ACC, the majority of them have good crowds. As a player, you should expect it. You shouldn't be surprised by it, if you're a good player. And so I don't think that bothers him at all. It's something for everyone to write about and think that [it bothers him], but I don't think it bothers him at all."

Mitchell, for his part, told the Louisville Courier-Journal that the boos were the loudest he's ever heard for a player.

"That was a little bit much, in my opinion," Mitchell told the newspaper. "At the end of the day, he's a kid, and you kind of feel for that. I don't think any parents want to see their kid getting chanted against like that, but it's the heat of the game, and in order to be professional, you're going to have to go through that. And I think he didn't let any of that get to his head obviously. He had 23 points, and he's a good player. I have a lot of respect for him."

Allen has been involved in three tripping incidents. The latest, last month against Elon's Steven Santa Ana, ended with Duke indefinitely suspending him and stripping him of his captaincy.

The suspension lasted only one game, which many thought was too short.

Pitino, though, said Saturday that he supported Coach K's discipline.

"He tripped one of my players. It's wrong, no question about it. But the one thing I don't do, I know Mike very well, he's an over-discipline guy. Believe me, that kid is paying the price in other ways, but you hear the crowd everywhere he goes -- they bury him like he's the modern-day Christian Laettner right now. I think he's a terrific person who has made some mistakes. I don't think he'll make them again. That's my opinion."

Information from ESPN's Brian Bennett and Andy Katz and The Associated Press was used in this report. Louisville flusters Duke in 78-69 win
Grayson Allen's game-high 23 points were not enough to overcome the Cardinals as the Blue Devils fall to 2-3 in ACC play. 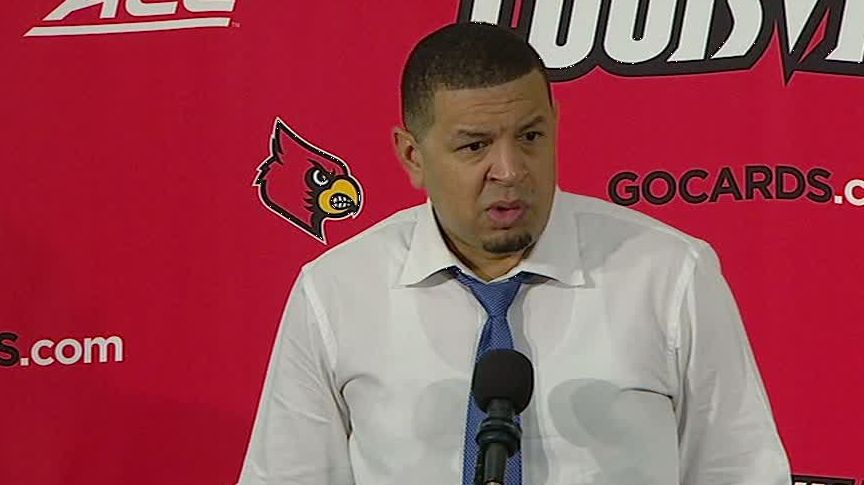