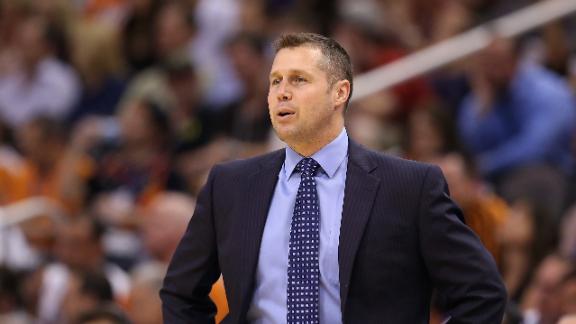 Memphis Grizzlies owner Robert Pera took to Twitter on Sunday to announce that, in a shock reversal, he is keeping Dave Joerger as his coach.

Sources close to the situation told ESPN.com that one-on-one conversations between Pera and Joerger, after Joerger traveled to Minneapolis and appeared on the brink of being hired by his home-state Minnesota Timberwolves, convinced the coach to stay with the Grizzlies.

@JohnnyNBA I think Dave is a great coach. But, personnel has to want to be in Memphis. I know now Dave 100% wants to be here

- Robert J Pera (@RobertPera) May 25, 2014The impromptu Twitter session was a rare foray into the public eye for Pera, who sources said has vowed to sweeten the terms of Joerger's remaining contract, which runs for two more seasons at nearly $4 million total.

The reconciliation was thoroughly unexpected after ESPN.com reported earlier this week that Pera considered firing Joerger earlier in his first season as the Grizzlies' coach after succeeding the popular Lionel Hollins. Sources say that the Grizzlies had spent the past few days drafting a list of potential coach and general manager candidates to replace Joerger and ousted team CEO Jason Levien, who was fired at the start of the week.

Although the Wolves and Grizzlies would have needed to reach an agreement on compensation to get Joerger released from the final two seasons of his Memphis contract -- something that sources say proved problematic -- Joerger's departure was highly anticipated all over the league. ESPN.com reported Saturday night that Memphis had begun plotting a run at ESPN analyst Jeff Van Gundy to offer him a dual coach/team president role to replace Joerger and Levien.

Coaching sources have maintained for days that the Wolves were reluctant to part with so much as a future second-rounder as compensation for Joerger because they were convinced that the Grizzlies would ultimately fire him.

But Wolves president and part-owner Flip Saunders, speaking to the Minneapolis Star-Tribune, didn't appear to leave much hope that the Wolves might still somehow get a shot at him, saying: "Dave was going through the interview process. We had good talks but it became very apparent to both parties that Dave was going to remain in Memphis."

Joerger is not only a Minnesota native but also a long-time student of Saunders. But Pera insisted Sunday that he and his coach are starting fresh after some heart-to-heart talks following Joerger's face-to-face interview Saturday with Wolves owner Glen Taylor.

@thesulton25 I never really talked 1:1 with Joerger before this weekend. I think he's a great coach.

- Robert J Pera (@RobertPera) May 25, 2014Chris Wallace has been reinstalled as the Grizzlies' interim GM in the wake of Levien's departure and vice president of basketball operations John Hollinger, who was hired by Memphis from ESPN, also remains with the team. Pera, though, did announce via Twitter that the Grizzlies "are conducting a search" for another front-office executive.

"Whether we decide on Chris or not for GM," Pera said, "I want him in the organization in some capacity."

It appears that the Wolves, meanwhile, have to relaunch their search for a replacement for the retiring Rick Adelman, barring any further unforeseen twists in what has been a wild week-long saga. Former Wolves forward Sam Mitchell is widely regarded as Minnesota's other top coaching candidate besides Joerger.

Sources said Pera's dissatisfaction with Joerger so early in the season was one of the factors that led to the breakdown in the owner's relationship with Levien, who was abruptly fired last week along with assistant general manager Stu Lash despite brokering much of Pera's purchase of the team from the late Michael Heisley in June 2012.

Levien was Joerger's biggest supporter when the decision was made after last season's 56 wins and a trip to the Western Conference finals not to award Hollins a new contract. The Grizzlies overcame a woeful start -- triggered in part by a Marc Gasol knee injury -- to go 50-32 under Joerger and extend the Oklahoma City Thunder to seven games in the first round of the playoffs. The Grizzlies had to play that Game 7 without the suspended Zach Randolph.

But now, after insisting that his relationship with Joerger has been patched, Pera said: "I will open up the checkbook and do whatever it takes to bring us closer to a championship organization."