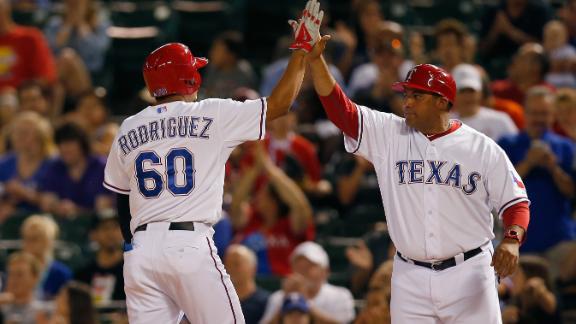 ARLINGTON, Texas -- This was a rare treat for a baseball team that's been on hard times for the bulk of the season.

Guilder Rodriguez, a career minor leaguer, got his second big league start on Monday night for the Texas Rangers and delivered for his dad by getting his first big league hit, RBI and run scored in a 4-3 win over the Houston Astros.

Rodriguez, 31, was excited about the opportunity to play because his father, Guillermo, hadn't seen him participate in a baseball game in the States since Low-A ball in 2004.

The biggest hit of the game came from Rodriguez who singled over the head of shortstop Jonathan Villar for his second hit of the game, breaking a 3-3 tie in the bottom of the seventh inning.

"This is one of the best moments of my life," said Rodriguez, who ended an 0-for-6 spell. "My first big league hit, my first RBI, my father in the stands, my wife. This is my second-best moment, after my two daughters were born."

Rodriguez has played for just two organizations, Milwaukee and the Rangers. His home ballpark has been in minor league cities such as Helena, Beloit (where his dad saw him), Huntsville, Frisco, Oklahoma City and Round Rock. He's played in the Dominican Republic when the season was over, where his dad would travel from Venezuela to see him.

Along the way, Rodriguez became a mentor to several players who are now in the big leagues. Luis Sardinas and Rougned Odor played with Rodriguez in Double-A and started in the infield with him Monday.

The pitcher whom Rodriguez got his big hit off, Nick Tropeano, he knew from the minor leagues.

A roommate from that 2004 game in Beloit, catcher Carlos Corporan, plays for the Astros and remembered his dad being at that game.

So you could say Rodriguez is the old sage without the big league rsum.

After Rodriguez got his first big league hit, his father was crying in the stands while hugging his daughter-in-law. The entire Rangers bench was standing and the crowd, announced at 28,717, also stood and cheered.

As the game progressed, Rodriguez caught a popup on the run, committed an error on a roller to third and got fired up with the game on the line.

Tropeano intentionally walked Robinson Chirinos with a man on and two out to pitch to Rodriguez.

"I faced Tropeano a lot in the minor leagues," Rodriguez said. "The last three years, I know how he throws and I'm very familiar with him at home plate."

Tropeano was behind 1-0 in the count, and Rodriguez guessed fastball and got one. He sent it to left for the go-ahead run.

Rodriguez also helped calm his relief pitcher. After starter Derek Holland departed following a leadoff single in the eighth, reliever Roman Mendez got into trouble with a one-out walk.

Rodriguez approached his fellow rookie to calm his nerves.

"He told me to keep my pitches down," said Mendez, who retired the next two hitters to end the inning. "He saw the hitters that were coming up and he wanted to make sure I was calm."

When his night was over, Rodriguez was given a Gatorade shower by veteran shortstop Elvis Andrus, who is, well, just 25.

"I think the only way to describe it is special," interim manager Tim Bogar said. "When he got his first hit, it was hard not to cry looking at his dad. It was pretty special. He got a chance to do it in front of his dad. And the second hit that gave us the lead is kind of storybook for us."