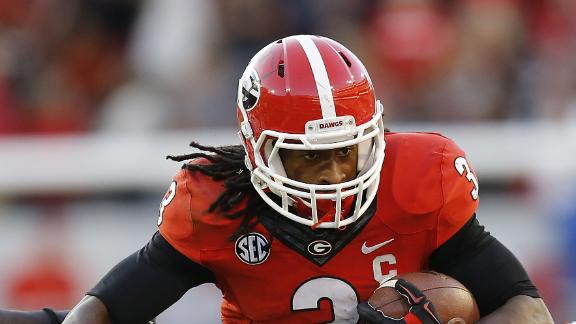 Georgia tailback Todd Gurley has been suspended indefinitely pending an investigation into an alleged violation of NCAA rules, the school announced Thursday.

A source told ESPN's Joe Schad that the NCAA investigation centers around whether Gurley was given money for autographs, memorabilia or the use of his likeness. Georgia officials did not reveal the alleged violation.

"I'm obviously very disappointed," Georgia coach Mark Richt said in a statement. "The important thing for our team is to turn all our attention toward preparation for Missouri."

One source in the autograph industry told ESPN's Darren Rovell that it was known that Gurley was seeking between $8 and $25 per signature, charging less to an autograph dealer if he signed more pieces.

Items with serial numbers L39251 to L39551 all showed up as Gurley-signed jerseys, meaning it was likely done at one time and sent in by the same person or company. Whether Gurley received money for them, however, is unknown.

A representative with the company could not immediately be reached for comment.

Gurley practiced with the Bulldogs on Monday, Tuesday and Wednesday, but it is unclear whether he practiced Thursday.

On Friday, Georgia was no longer selling Gurley No. 3 jerseys on its official website. The school was previously selling two Nike jerseys -- one for $134.95 and one for $89.95.

Gurley leads the Bulldogs with 773 yards rushing and eight touchdowns, averaging 8.2 yards per carry. In addition, he has 11 receptions and a 100-yard kickoff return for a TD.

The junior established himself as a leading Heisman contender with several signature games and moments, including a school-record 293 all-purpose yards in a season-opening victory over Clemson, not to mention a hurdler-like leap over a Tennessee defender to pick up an extra 10 yards.

He ran for 163 yards and two TDs against Vanderbiltlast week while also completing a 50-yard pass -- Georgia's longest of the season. Gurley is the conference's leading rusher with 154.6 yards per game, and his 194.6 all-purpose yards ranks second nationally behind Nebraska's Ameer Abdullah (195.8).

With 3,147 rushing yards, Gurley needs 86 to pass Garrison Hearst for second on the school's all-time list.

Freshman Nick Chubb, who ranks second on the team with 234 yards rushing and has three total TDs, will likely step in to start against Missouri. Sophomore Brendan Douglas is the only other back with significant experience.

The Bulldogs began the season with plenty of depth at running back, but that has taken a blow in recent weeks with injuries to top backup Keith Marshall and freshman sensation Sony Michel, who had rushed for 223 yards and three TDs on 23 attempts before injuring his shoulder against Tennessee.

The Bulldogs have run the ball at least 35 times in every game while making no more than 26 passing attempts.

Georgia is opening a four-game stretch that includes two other road contests against Arkansas and Kentucky, as well as its annual showdown with rival Florida in Jacksonville. The Bulldogs will go 42 days between home games -- their most since 2008.

Former Georgia star receiver A.J. Green was suspended for the first four games of the 2010 season after he acknowledged selling his Independence Bowl jersey to a former North Carolina player, who was regarded as an agent by the NCAA. Green had to repay the $1,000 he received, which went to charity, and the suspension dampened his final season with the Bulldogs. He went on to become a first-round pick of the Cincinnati Bengals.

Former Texas A&M star Johnny Manziel was investigated before the 2013 season when reports surfaced that he had received money for signing autographs. The NCAA reached an agreement with the school for Manziel to sit out the first half of the opening game against Rice, with no finding that the player did anything wrong.

Darren Rovell and Chris Low of ESPN.com and The Associated Press contributed to this report.

Impact Of Gurley's Suspension On Georgia
Rece Davis, Jesse Palmer and David Pollack break down how Todd Gurley's indefinite suspension for an alleged violation of NCAA rules will impact Georgia on the field.