Hakstol confident in leap from college to Flyers coach 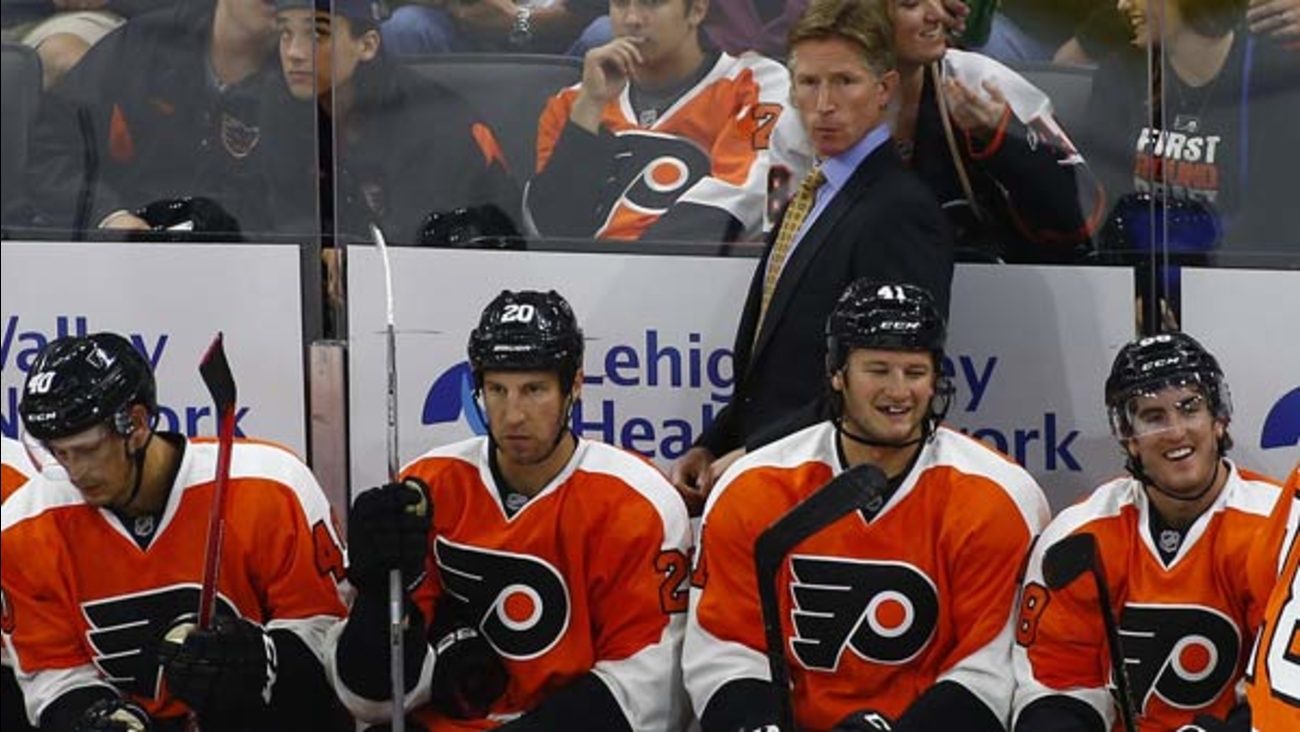 Philadelphia Flyers head coach Dave Hakstol looks on from the bench against the New York Islanders during the third period of an NHL preseason hockey game in Allentown, Pa. (AP Photo/Rich Schultz)

PHILADELPHIA -- Dave Hakstol left the college game behind at North Dakota when he was hired by the Flyers. He never stopped recruiting.

Hakstol had just been tabbed as Philadelphia's new coach in May - eliciting a collective "Who?" from the orange-and-black-clad faithful - when he went to work on his new players. He was selling himself and his vision for the Flyers, and no stop was too distant.

Not even the Czech Republic to dine with All-Star Jake Voracek.

"He called me that he wanted to do dinner. I was like, 'Sure. I'll be in the States in July,' and he said, 'No, no, I'm coming over to the Czech Republic,'" Voracek said. "I was like, 'OK, for how long?' He said just one night. I kind of started laughing."

So Hakstol and Voracek met nearly 4,000 miles away from Philadelphia in June and dined on Czech beer and Czech food ("lots of carbs," Voracek said). Hakstol picked up the tab and Voracek soon signed a $66 million, eight-year extension that locked up the centerpiece player of a retooled franchise.

"What the hell, I'd never been to Prague before," Hakstol said, laughing. "I wish I could have done it with more players."

Hakstol is now making a nearly unprecedented leap from a collegiate hockey program to NHL coach. He's the first since Bob Johnson went from the University of Wisconsin to the Calgary Flames in 1982. The Flyers are gambling that their rookie can eventually help them snap a Stanley Cup championship drought that dates to 1975.

"I had a list of things that I wanted from a head coach, and went down the checklist in my mind and every box was checked except for the NHL experience," Flyers general manager Ron Hextall said. "Quite frankly, for me, that was one that was least important. No different than a rookie player. Does Dave have things to learn? Absolutely."

The 47-year-old Hakstol seemed at ease with his transition, even if the differences from the NCAA seem as wide as the 1,500-mile gap between Grand Forks, North Dakota, and Philadelphia. He'll have maybe a day or two to prepare for games instead of a week, the season could last almost 10 months, and he's dealing mostly with hardened veterans who have been through the grind of 82 games instead of wide-eyed kids. There's less time for teaching at the rink.

"Is the message going to be delivered differently? Of course it will, they're men," Hakstol said.

But at the end of the shift, hockey is still hockey.

"I'm not going to pretend I know anything I don't," said Hakstol, who scratched veterans Sam Gagner and Vinny Lecavalier for Thursday's season opener at Tampa Bay.

The harshest part of winter in Philly is often the blunt criticism that comes paired with a 41-year Stanley Cup freezeout. The Flyers have been close: Philadelphia lost in the Stanley Cup finals in 1976, 1980, 1985, 1987, 1997 and 2010. That's more than 14,000 days without winning the championship, as tracked by SinceFlyersCup.

Hakstol, who signed a $10 million, five-year deal with the Flyers, understands the misery of falling short at the end. He went 289-143-43 at North Dakota with a .654 winning percentage over 11 seasons - and no national titles.

"At North Dakota, success was hanging a green banner," he said. "We had been to the Frozen Four a lot but we couldn't win our last game. That was a real decision-making point for me. I had to make sure as I was moved forward, I wasn't looking back over my shoulder at that fact."

Hakstol could have kept trying to win a championship in a job he likely could have held for decades, passing up a chance to become the Mike Krzyzewski of his sport for a shift to a franchise that burns through coaches like its changing lines. Hakstol is Philadelphia's 10th coach in the last 20 years.

Toews, winner of three Stanley Cups with the Chicago Blackhawks, said Hakstol should be a natural fit in the NHL.

"He was a great motivator. He found a way to get the guys on the same page," he said. "Unfortunately, we came up short the two years I was there. Almost every year he was a coach that was at the Frozen Four. They never could quite get the bounces to win. But he recruited well, coached well and I'm sure that ability will translate to the next level."

Hakstol said only the last two or three years had he really thought about becoming a head coach in the NHL. He had brief discussions with other teams through the years, but only got serious when Hextall called. He coached Hextall's son at North Dakota, but said he didn't have much of a relationship with the Flyers GM until after Craig Berube was fired.

"When you look it from the outside, it seems like a huge transition," Hakstol said. "But a lot of people had made it easy."