Hank Aaron in bidding for Hawks 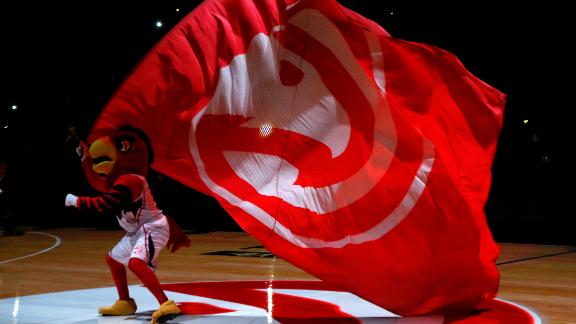 Former baseball home run king and Atlanta icon Hank Aaron has joined a group of current owners from the NBA, Major League Soccer and Italian soccer's storied Serie A that is seeking to purchase the Atlanta Hawks, according to league sources.

The deep-pocketed consortium, sources say, also includes a select and diverse group of prominent investors, including Aaron and other Atlantans.

Said Allen Tanenbaum, Aaron's longtime business adviser, when reached Sunday night by ESPN.com: "This is a private process and he'd like the private process to play out."

After a historic two-decade run of slugging in which he shattered Babe Ruth's all-time record by hitting 755 home runs, Aaron has spent much of his post-playing career as a baseball executive as well overseeing a business portfolio that has featured numerous car dealerships and restaurants. Sources say Aaron's devotion to Atlanta as a city and his longstanding fondness for the Hawks as a basketball fan led him to join this group of bidders.

The 1982 Baseball Hall of Fame inductee, whose 715th homer in April 1974 ranks as one of the most indelible images in the annals of American sport, founded the 755 Restaurant Corporation with wife Billye in 1995.

Kaplan is a co-founder of the leading global investment firm Oaktree Capital Group. Widely regarded as a savvy private equity investor, Kaplan previously led an unsuccessful bid to purchase the San Diego Padres before emerging as a member of the ownership group which acquired the Grizzlies from the late Michael Heisley.

Thohir and Soetedjo, in 2011, became the NBA's first-ever Asian owners when they partnered with Levien as members of the Josh Harris-led purchase of the Philadelphia 76ers. Thohir and Soetedjo currently co-own DC United with Levien, while Thohir concurrently serves as majority owner and president of Italian soccer giants Inter Milan. All three have since sold their respective stakes in the Sixers.

Kaplan and Levien worked together in Memphis after Levien largely assembled the Pera-led ownership group which took over the Grizzlies in June 2012 and promptly helped the club reach the conference finals -- and place No. 1 in ESPN The Magazine's 2013 Ultimate Standings survey -- in their first season together.

Levien has a track record of successfully teaming up with high-profile athletes and entertainers, having partnered with pop star and Memphis native Justin Timberlake and Denver Broncos quarterback Peyton Manning in the Grizzlies' ownership group, as well actor Will Smith in the Sixers' ownership group before that.

The new group featuring Aaron and his partners is the second known consortium with certifiable interest in buying the Hawks. NBA.com and Bloomberg.com reported earlier this week that former NBA stars Grant Hill and Junior Bridgeman have teamed with USA Basketball chairman Jerry Colangelo and son Bryan Colangelo, two-time NBA Executive of the Year, to form a group that also will be bidding on the team.

The Hawks officially went on the market this week in the wake of the embarrassing revelations last summer stemming from the exposure of racially insensitive e-mails and conversations within the organization. The scandals prompted majority owner Bruce Levenson to immediately announce his intention to sell the team in September and led to an indefinite leave of absence for general manager Danny Ferry, who has been forced to watch from afar while the group he has assembled has unexpectedly risen to the top of the Eastern Conference on the strength of a 29-8 start.

The Hawks were valued in 2014 by Forbes at $425 million, but that figure was issued before Steve Ballmer's purchase of the Clippers for a staggering $2 billion in a bidding process that also featured a group led by Hill. The operating rights to Phillips Arena are also for sale, but attendance this season has still lagged in the bottom third of the league despite the Hawks' surprising on-court performance.

The Atlanta Journal-Constitution reported last week that 100 percent of the franchise will be available to prospective buyers, with Goldman Sachs and Inner Circle Sports overseeing the sale and vetting interested parties. The newspaper reported that April is a potential target for finalizing an agreement, with the group that ultimately wins the bidding process also requiring NBA approval.

Grantland's Bill Simmons likewise tweeted earlier this week about two Seattle-based groups, led respectively by Chris Hansen and Thomas Tull, which have expressed interest in buying the Hawks to try to relocate the franchise to the Pacific Northwest. But the Hawks' current owners, league officials and Atlanta Mayor Kasim Reed have been adamant about their intent to keep the franchise in Atlanta.

TNT's David Aldridge reported via Twitter earlier this week that the Hawks would have to pay a $75 million fee to the city of Atlanta and Fulton County to free themselves from the club's lease before 2017. The Hawks, according to a 2012 SB Nation report, would also have to pay off bonds from a 2010 refinancing to be able to move, which would also be subject to the NBA's blessing.

Hawks Owners Approve Plan To Sell Team
Amin Elhassan discusses why Hawks owners have agreed to sell their shares of the team, as well as who are some of the prospective buyers.