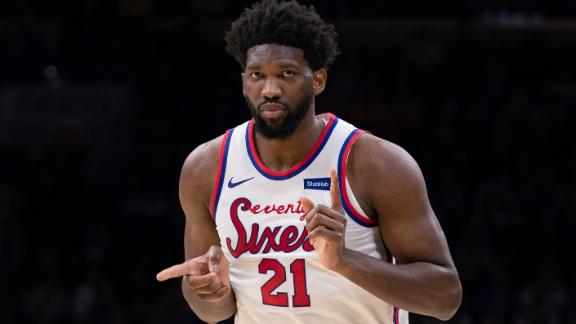 ESPN
PHILADELPHIA -- Tobias Harris seems to have found a comfort zone with his offensive game, providing another concern for opponents of the Philadelphia 76ers.

Harris scored 31 points, Ben Simmons had 24 points and 11 assists, and the 76ers survived a late scare to beat the New Orleans Pelicans 116-109 on Friday night.

Joel Embiid finished with 24 points and 11 rebounds in Philadelphia's fifth straight victory. It was also the 14th consecutive home victory for the 76ers, the franchise's longest streak to start a season since winning 22 straight home games in their NBA championship season in 1966-67.

They are now the only undefeated team at home in the NBA after Miami dropped its first home game of the season on Friday night to the Los Angeles Lakers.

One night after Embiid put up 38 points and 13 rebounds during a 115-109 win in Boston, it was Harris who became the main scoring threat by rolling outside and taking advantage of some double-teams that the Pelicans threw against Embiid. Harris shot 12 for 20 from the floor, many of them mid-range jumpers.

"I know that when I'm aggressive and getting things in the flow, I'm a very hard player to guard," said Harris, who has averaged 23.6 points in seven December contests.

"He has been so reliable and a go-to guy for us," Brown said. "I put him in a bunch of different spots: pick-and-roll, isolation, 3-ball, and he plays the backdown game. He's having a hell of a year."

Harris was a trade deadline acquisition for the 76ers in February, but seemed to struggle at times fitting into the offensive attack when Jimmy Butler was around. There seems to be an added comfort level in his play this season after re-signing as a free agent in the summer.

"This is one of my best stretches as a player and since being here," Harris said. "I feel like I'm in a good rhythm and balance here. I never want to come off the floor. I want to do what I can to help us win. Just being able to get familiar with guys on this team has helped and continues to increase. Being able to find ways to play with Ben and Joel in pockets of the game has been great. I understand more of what I need to do."

Brandon Ingram scored 32 points and J.J. Redick had 19 for the Pelicans, who have lost 11 in a row.

"We don't have any kind of margin of error," Pelicans coach Alvin Gentry said. "We missed nine free throws at one point. We can't do that. We have to make those. And there's a couple of plays here and there. Our margin of error is not good enough that we can let those plays go by."

New Orleans briefly took a lead in the third quarter after trailing by as much as 16 in the first half. Philadelphia responded, however, with a 22-11 run to close out the quarter to swell the lead to 92-82 at the end of the period.

Sixers: Al Horford missed his second straight game on Friday night with left knee soreness and left hamstring tightness. Horford, who sat out his first game back in Boston Thursday since departing as a free agent in the summer, is averaging 13.8 points and 6.8 rebounds. Horford was listed as day-to-day.

Pelicans: Derrick Favors returned to the starting lineup. Favors missed time with a knee injury and following the death of his mother in late November. Favors had eight points and eight rebounds in 15 minutes. . Redick returned to Wells Fargo Center for the first time since signing as a free agent with New Orleans over the summer. Redick was Philadelphia's leading 3-point shooter during his two seasons, shooting 40.8 percent and averaging 17.6 points. A video tribute was played during a timeout in the first quarter and Redick received a standing ovation. . Zion Williamson, the top pick in the draft, missed his 22nd straight game with a right knee injury. There is no timeframe for Williamson's return.

Philadelphia missed nine free throws in the final 3:17 to allow the Pelicans back in the game after trailing by as many as 13 earlier in the period. Embiid also fouled Jrue Holiday behind the 3-point arc with 21 seconds left. The former Sixers guard hit two of three from the line to cut Philadelphia's lead to 112-109.

"There are some good things that happened in that game and there are some poor things that happened in that game," Brown said. "My mind is completely on what do we have to do to not be in that situation. Some of it is missing free throws -- a lot of free throws. And we had poor fouls. We fouled them too much when it mattered most in the last three minutes."