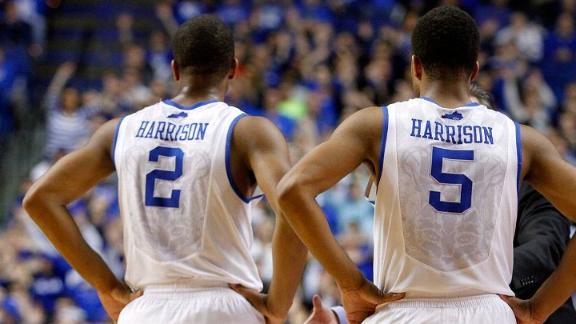 Kentucky's chances of returning to the Final Four increased dramatically Friday with the decision of freshmen guards Aaron and Andrew Harrison to return to the Wildcats for their sophomore seasons.

The twins made their announcement via Twitter on Friday after Yahoo! Sports reported it through sources an hour earlier.

Glad to say that I will be back at UK for my sophomore year. #BBN

- Aaron Harrison (@AaronICE2) April 25, 2014"They wanted to stay in school,'' their father, Aaron Harrison, told ESPN by phone. "They wanted to explore their options and see what's out there. They probably made up their minds last week. All the information they got from the draft was that they were middle to late first round. They had to weigh going back to school and improving and maturing. All the things added up to that.''

Aaron Harrison said that until then Calipari didn't know what the twins would do. When reached by phone before departing on a flight to Sacramento, Calipari told ESPN that he spent five minutes with the two earlier in Lexington and just told them that they were "great kids.''

"I'm excited about Aaron and Andrew's decision to return for next season," Calipari said in the statement. "Their postseason play was a result of the improvement they made all season and displayed what they're capable of doing on the court. I look forward to having the opportunity to work with them during the summer and watch them lead next year's team."

The Harrisons join returnees Alex Poythress, Willie Cauley-Stein, Marcus Lee and Dakari Johnson on next season's team. The six players, who could have all left early for the NBA draft, were the Nos. 3 through 8 scorers on the Wildcats. The top two scorers -- freshmen Julius Randle and James Young -- have declared for the draft.

The NBA's early-entry deadline is Sunday night. Under NCAA rules, once an underclassman officially declares and sends in his paperwork to the NBA, he cannot return to college.

The combination of returnees and newcomers likely means the Wildcats will be the preseason No. 1 for a second straight season. Kentucky has played in three Final Fours in five seasons under Calipari, including winning the national title in 2012 and losing in the final this month to UConn in Arlington, Texas.

"I'm coming back for a second season in large part because last year's title run was special, but we still have unfinished business," Aaron Harrison said in a statement.

The Harrisons were instrumental in Kentucky's run to the national title game, with Aaron hitting epic late-game 3-pointers to beat Michigan and Wisconsin. In the regular season, Aaron averaged 13.7 points a game, and Andrew averaged 10.9.

The elder Harrison said the family was besieged by agents wanting to represent the brothers and that the family did interview a number of agents.

"Oh lord,'' he said. "That is something that any kid that doesn't have a father or a surrogate father has to deal with. It's a business and I feel sorry for someone that has to deal with that. It's beyond me. We had a couple of agents that we talked with that were weighing both sides of it.''

Aaron Harrison said his sons would spend part of the summer in Lexington working on their games.

"Basketball is an imperfect sport,'' he said. "They've got a lot to work on. They can improve on every aspect of the game.''

Guess who's back, #BBN. Aaron and Andrew Harrison have decided to return to Kentucky for their sophomore seasons! pic.twitter.com/OE9CemAN69