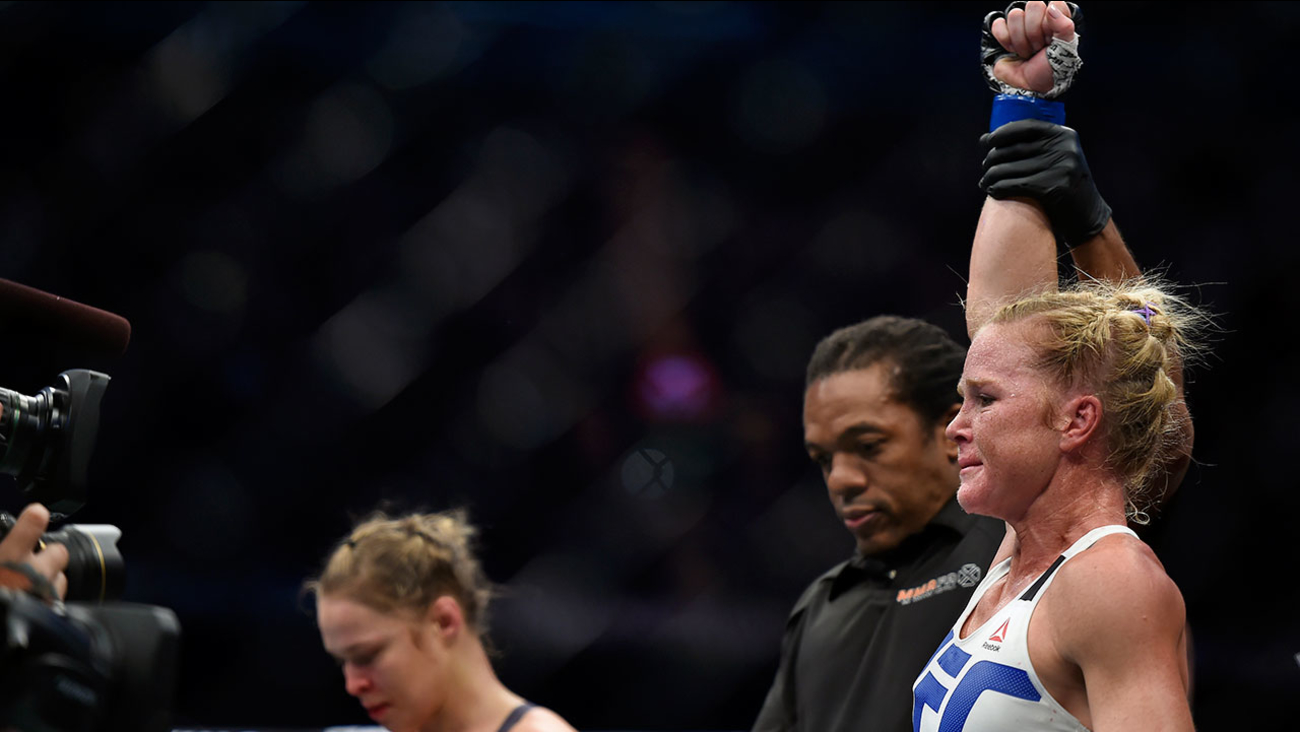 MELBOURNE, Australia -- Holly Holm pulled off a stunning upset victory over Ronda Rousey in UFC 193, knocking out the women's bantamweight champion in the second round with a powerful kick to the head Sunday.

The fight started at a frenetic pace with Holm landing some powerful shots to the unbeaten Rousey's head, leaving the frustrated champion with a bloodied nose at the end of the first round.

Rousey attempted to dominate the second round, pushing Holm around the ring until the challenger snapped a massive kick to the head that instantly dropped her opponent to the canvas.

Holm (10-0) jumped on the prone Rousey, delivering several blows to her head before the referee intervened. An ecstatic Holm jumped around the ring as Rousey received medical treatment amid the roar of a stunned record UFC crowd.

"I had so much love and support I just thought, 'How can I not do this?'" Holm said from the ring. "This right here is priceless."

Rousey, a former judo Olympian, was unbeaten through 12 UFC fights before meeting Holm, and a win would have been her seventh title defense. Instead, a veteran female boxer from New Mexico has the championship belt.

"I have to say that everything that we worked on presented itself in the fight. Every grab that she tried to get and clinch on the cage, and I just had help with everything," Holm said. "I have not spent this much time in the gym before any fight of my life."

Rousey left the stadium to receive treatment for facial cuts at a nearby hospital after the loss and skipped the post-fight media conference.

UFC chief Dana White said a rematch between Holm and Rousey made "a lot of sense" and would put other potential matchups on the backburner.

In the other title bout, a bloodied Joanna Jedrzejczyk outlasted Valerie Letourneau to successfully defend her straw-weight belt in a five-round slugfest.

Jedrzejczyk won a unanimous points decision over Letourneau, who offered the champion one of her tougher fights in some time.

After containing Jedrzejczyk early on, Letourneau was slowed by a powerful front kick to the face with just over a minute left in the first round.

The six-time Muay Thai world champion Jedrzejczyk built the pressure from the second round with some trademark, lightning-quick combinations to Letourneau's head, while forcing the challenger to keep her distance with some effective kicks.

Organizers announced a crowd of 56,214 at Melbourne's Etihad Stadium, which normally hosts Australian rules football matches. The mark eclipsed the 55,724 fans who attended UFC 129 at Toronto's Rogers Centre in 2011.

In other fights, Mark Hunt of New Zealand won his rematch with Brazil's Antonio Silva by technical knockout after the referee stopped the feature heavyweight bout in the first round.

New Zealand-born Australian middleweight Robert Whittaker was rewarded for his gutsy win on points over Uriah Hall with a deafening roar from the partisan Aussie crowd.