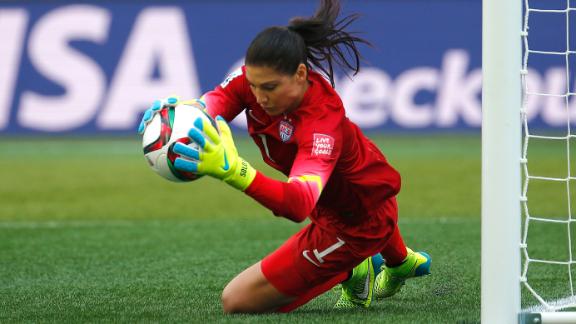 Embattled goalkeeper Hope Solo indicated the latest revelations about her 2014 domestic violence arrest are no distraction to her producing her best form after she helped lift the United States to a 3-1 win over Australia on Monday in the Americans' opener at the Women's World Cup.

"I'm perfectly focused,'' Solo said when asked whether it was difficult to maintain concentration.

Solo saved four shots on goal, including a pair of big saves in the first 15 minutes against the hard-charging Matildas, before the U.S. went ahead for good in the 61st minute.

Solo started a day after ESPN's "Outside the Lines"reported she was combative with officers after her arrest last year on accusations that she assaulted her half-sister and her teenage nephew, an incident during which authorities described Solo as the "primary aggressor.''

"That was a long time ago. I'll be honest, we've moved on,'' U.S. coach Jill Ellis said. "She's been a fantastic player and teammate. None of that has even resonated with us, and I'm sure many of the players aren't aware of it."

Solo was tested in the fifth minute, when she tipped Emily Van Egmond's shot off the crossbar and over. She made another save on Michelle Heyman in the 13th.

"Hope came up absolutely huge for us,'' U.S. midfielder Megan Rapinoe said. "At least three saves that no one else in the world could make.''

Solo initially faced two misdemeanor counts of domestic violence in the altercation at her half-sister's house last June, although those charges were dismissed on procedural grounds earlier this year. Solo pleaded not guilty and portrayed herself as a victim in interviews after the dismissal of the case.

"Outside the Lines," citing police records, two sworn depositions and interviews with one of Solo's alleged victims, reported Solo had been drinking when she arrived at the home of her half-sister, Teresa Obert, and was the aggressor in the altercation, including slamming the teenager's head into the floor.

OTL also reported Solo was so combative after her arrest that she had to be forced to the ground by police and that she insulted officers.

Ellis said Sunday she had no plans to address the team about it.

"I know our team. We have each other's backs. I'll be honest, it's something that was a long time ago. We've certainly put it to bed, and our focus is tomorrow evening,'' Ellis said.

Solo was not made available to reporters Sunday, but she was at practice, laughing and joking with her teammates while warming up before heading off to work in goal. She is widely considered one of the best goalkeepers in the world.

The Americans' next match in difficult Group D will be Friday against fifth-ranked Sweden and former U.S. coach Pia Sundhage.