How good were Barkley's Monstar teammates? 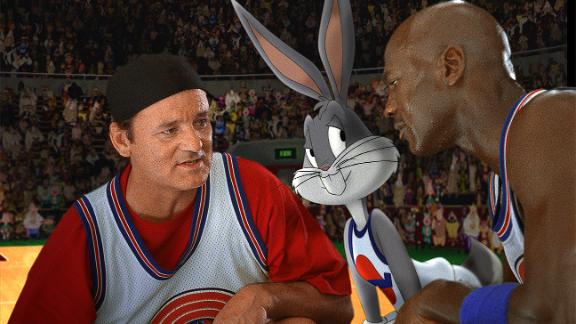 Between Jesus Shuttlesworth turning 40, the Indiana Pacers' Hickory High jersey announcement and Warner Bros. media deal with LeBron James (which means he maybe-probably will star in a "Space Jam" sequel), it's been a distinguished week for Hollywood basketball.

But Nick Teixeira beat all of those stories to the punch.

Teixeira, an NBA fan and redditor living in Toronto, brought up an interesting point Monday on r/NBA with his assertion that "Space Jam"'s Monstars "were easily the worst team Charles Barkley has ever played on."

The plot of 1996's "Space Jam," one might recall, is simple. An evil alien tries to abduct the Looney Tunes to perform in his theme park, and Bugs Bunny & Co. have one way out -- a basketball game for their freedom. To stack the odds, the aliens rob then-NBA players Larry Johnson, Muggsy Bogues, Patrick Ewing, Shawn Bradley and Barkley of their talent, infusing those powers into a super team called, yes, The Monstars.

The Tunes recruit Michael Jordan, win The Big Game, and the rest is cinematic history. Why it didn't win an Oscar, we may never know.

Teixeira lays out his case, pointing to the Monstars lack of collective championships or MVP awards and stacking that starting five against the best rosters Barkley played on during his stops at three franchises -- specifically the '85-'86 Philadelphia 76ers, the '92-'93 Phoenix Suns and the '96-'97 Houston Rockets.

He makes a pretty strong case that Sir Charles was surrounded with more talent on each of those teams than he ever was on the fictional court in the cartoon netherworld.

ESPN.com caught up with Teixeira to talk him about how this silly research came about.

ESPN.com: Where did this idea originate?

Teixeira: I've always kind of had the idea in my head that the Monstars just weren't that good. I especially like the idea that (the aliens) went to a Knicks-Suns game to recruit - where they got Barkley and Ewing - and then they apparently went to a Hornets-Sixers game? And they snubbed Alonzo Mourning in Charlotte!

The other half came because I wanted to see which NBA team in history had the most Hall of Famers on it. That ended up being the 1986 76ers, with Barkley, Dr. J, Moses Malone and Bob McAdoo. Right behind them is the Showtime Lakers, and the newer Lakers with Karl Malone and Gary Payton.

ESPN.com: That 2004 Lakers team will eventually tie them once Shaq and Kobe eventually get inducted.

Teixeira: Right. That's when I sort of realized that Barkley had better teammates on that Sixers team than he did on the Monstars.

ESPN.com: When you did test that theory against his other teams?

Teixeira: Well, as I was looking, I saw he had years at each franchise that were better than the Monstars. It's funny, Barkley always complains about his Philadelphia years, not having any teammates, and those first two years he had maybe the most stacked team of any era.

Even the Bulls at that time in 1996, or maybe even the Suns... Some of those teams would've been better as a team than the Monstars.

ESPN.com: Say Warner Bros. fires up a sequel starring LeBron. Who are your 2016 Monstars?

Teixeira: Definitely Blake Griffin and Chris Paul. They come from the same team, they're actually funny actors, and they're both kind of villains in the league right now.

I'd like to see Kobe, but I don't think that's ever going to happen; Dwyane Wade, I'd take him at the two because of his history with LeBron; DeMarcus Cousins as the big man, and... Man, who do I have left? Let's go with James Harden.