How important is Markelle Fultz to a deep 76ers playoff run? 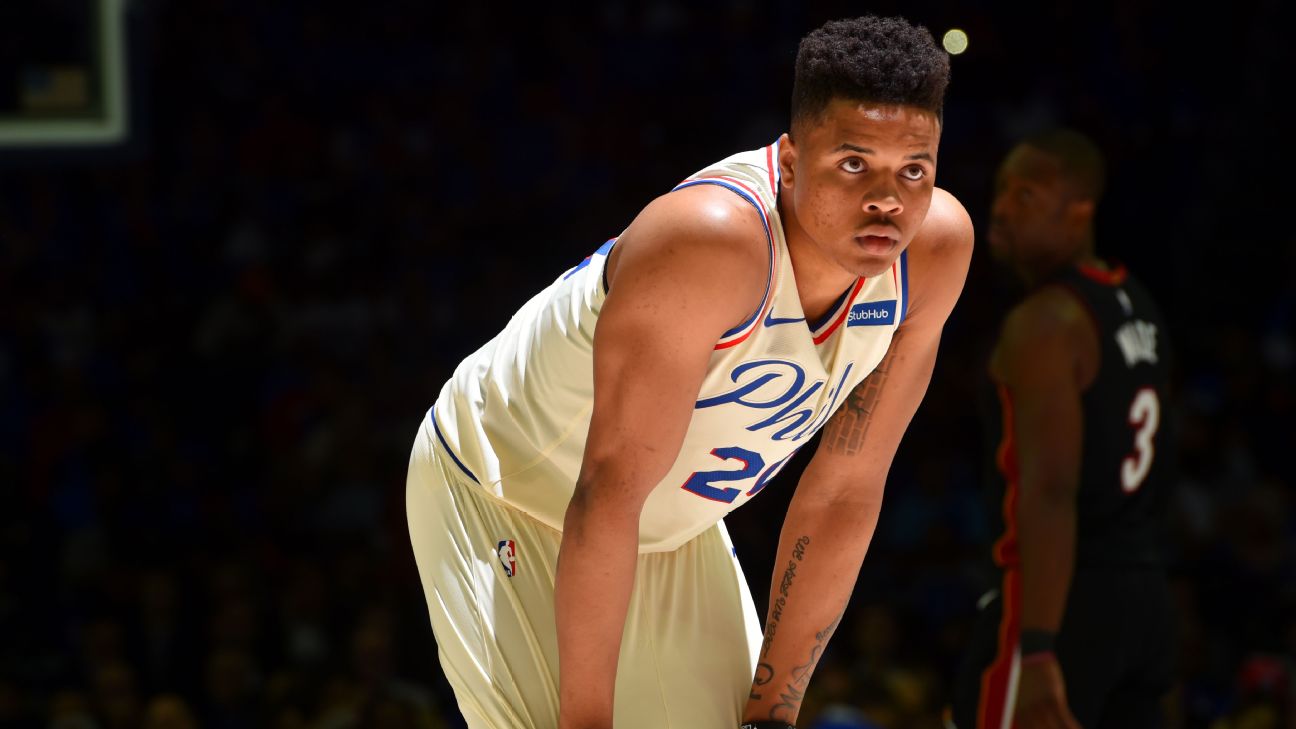 After a controversial five-month hiatus, Markelle Fultz's surprising return to the surgingPhiladelphia 76ers has played a sizeable role in their late-season run as the hottest team in the NBA. In his past 11 games, Fultz is averaging an impressive 15.3 points, 6.8 rebounds, 9.4 assists and 2.1 turnovers per 36 minutes while becoming the youngest player in NBA history to notch a triple-double in the Sixers' regular-season finale. He has also helped spark a seemingly unstoppable bench unit.

Slotted behind likely Rookie of the Year Ben Simmonsand playing in a lineup with shooting and experience at virtually every position, Fultz has been able to play free of wild expectations. But fans still hang on his every jump shot attempt.

What shape is his jumper in now? And how is it affecting the rest of his game? As the Sixers bid for a 2-0 series lead over the Miami Heat and a deep playoff run, let's dive into the impact Fultz can make.

Where is Fultz as a shooter?

While he has been a major contributor to a variety of wins, Fultz has attempted just one 3-pointer and 13 free throws (seven makes) since returning, shooting 42.5 percent from inside the arc. His jumper is a far cry from his Washington "hesi pull-up jimbo" form, as he showed against the Heat with an airballed pull-up and several turned-down, catch-and-shoot or off-the-dribble jumpers.

Fultz's lack of confidence in his 3-ball is clear when teams go under screens or give him space, though he's making incremental strides in midrange spots. He rarely looks at the rim in such situations, opting to spin into the paint or get off the ball. It's unlikely Fultz will rediscover his pull-up 3 during a high-intensity playoff run, so expect him to continue getting the Sixers into their sets or relying on midrange pull-ups and dashes to the rim before addressing the issue in the offseason.

The Heat regularly sagged off Fultz when he initiated offense in the half court, daring him to beat them from the perimeter:

Although he's not yet a threat from NBA 3, Fultz's jumper is in far better shape than it was in October.

He's still working through some rust and trying to find his natural release point, but Fultz has looked quite comfortable rising up from 15 feet despite what his percentages say (scoring only 0.538 points per possession on 26 pull-up jumpers). He set all of Philadelphia on fire with a crossover pull-up and hang-dribble jumper against the Denver Nuggets' Mason Plumlee in his first game back, and he has had some nice moments in and around the paint since then, showing flashes of what made scouts fall in love with him at the college level.

He remains extremely talented in creating space with spin-move step-backs or change-of-pace crossovers, and he keeps defenders on their heels before elevating into his pull-up. He has a special live-dribble package, and his ability to go get his midrange jumper at will, along with his positional size, have allowed him to remain a scoring threat in the half court despite playing almost exclusively inside the arc.

He maintains fairly sound mechanics when he's in his comfort zone -- in or just outside the paint with the ability to use his dribble to generate rhythm and confidence. While his release point is still different than when he shot 41.3 percent from 3 with Washington, his progress is noticeable, and the results should continue to improve as his career progresses.

The limited range is hurting Fultz more off the ball. He rarely spots up beyond the 3-point line, either diving to the rim or finding a body to screen. His body language doesn't exactly suggest that J.J. Redick should fire a quick swing, even though he's wide open:

When teammates do hit him, he attacks immediately rather than looking at the rim from 3, which is something he actually had a tendency to do at Washington, as well.

Here's a perfect example of exactly where Fultz is as a shooter right now while also showing his unique, herky-jerky nature and incredible shot-creation potential:

He turns down what would normally be a rhythm 3, getting into his comfort zone with a series of spins, step-backs, pivots and eventually a jump hook. While an impressive move, it's also a lot of work for a contested 2 when a 3 was open.

Some of those limitations make it tough for Fultz to play big minutes with Simmons, who is clearly at his best with four shooters. Fultz was an average catch-and-shoot player at Washington, attempting only 60 such shots and ranking in the 57th percentile on guarded catch-and-shoot jumpers. His release and setup was never overly fluid, but he was far more capable than he is at this stage.

He has taken only two catch-and-shoot jumpers since returning to the lineup -- that 3 and another square-in-the-air, on-the-move, midrange attempt at the end of the shot clock that looked natural and fluid. The confidence hurdles Fultz is battling show most in spot-up situations, so continuing to find ways to put the ball in his hands with shooters around him is ideal moving forward. Fultz comes alive as a ball handler, and he has shown glimpses of why he was more or less considered the consensus No. 1 pick in the 2017 NBA draft.

What can Fultz bring during Philly's playoff run?

Shaky jumper or not, Fultz can still add major value to a Sixers team that was dying for another playmaker.

Where Fultz has really popped off the screen is in the open floor. With the size of some NBA wings, his ability to shift gears on a dime while keeping his chest square to the rim isn't something you often see from lead guards. His patented right-to-left spin move has put numerous defenders through the blender, as his physicality and agility are extremely rare.

Transition has made up 29.5 percent of Fultz's possessions since returning, according to Synergy Sports research. While he has missed a few bunnies at the rim and is scoring only 0.806 points per possession, his sheer ability to change the game in space has ignited Philly's bench. The Sixers' second unit posted a below-league-average net rating of minus-2.8 before Fultz's return, but since that Nuggets game on March 26, they've had the best bench in the league with a net rating that surged to plus-12.5, according to NBA Advanced Stats. (Fultz played in more than 80 percent of those bench minutes.)

His unselfishness as a playmaker in transition has really stood out, as well. He does a great job of pushing pace, identifying shooters such as Redick and Marco Belinelli and driving toward their defender before shoveling the ball back for an open 3.

2. Attacking the paint to score and facilitate

Even without the pick-and-roll efficiency from his college days, Fultz remains a dynamic threat as a distributor, slasher and short-range shooter on the move, and the Sixers' staff has done a great job of getting him going to the rim by shifting the defense and letting him attack.

He changes pace impressively and uses his combination of sheer size, unique athleticism and stride length to get good looks. He has also shown his ability to attack switches. He's a talented one-on-one scorer when his pull-ups are falling and defenses don't aggressively sag.

Where Fultz has been most impressive is as a facilitator. Even with defenders not having to pressure him, he has found ways to get into the paint and kick out to open shooters or hit the roller in stride. He whips around passes with either hand and boasts an impressive 4.5 assist-to-turnover ratio over his past 11 games, playing with great unselfishness while still protecting the ball.

Fultz's ability to make others better has been a big reason his transition has been fairly seamless after missing so much time, and that should continue to be the case in the playoffs.

While his lack of spot shooting kills offensive flow at times, Fultz can have an impact off the ball by staying active as a cutter, playing off the Sixers' many talented passers.

Brett Brown uses Fultz's big body as a screener to spring Redick and Belinelli, and Philly could get even more creative with ways to get Fultz on the move to the rim. He's still learning how to play with more urgency off the ball, but there's certainly potential there.

A low-effort defender at Washington, Fultz is starting to play with much better energy. He's more than capable of checking three positions and holding up against switches with his frame and length. He didn't look out of place matching the physicality of Miami'sJustise Winslow. Plus, he's averaging 1.7 steals per 36 minutes this season and has baited opponents into a handful of inbound turnovers:

He still gets caught napping and can be taken advantage of by more experienced players, but being able to switch everything with him on the floor helps the Sixers, especially against a smaller Heat team.

Of course, Fultz alone isn't responsible for this winning streak, which started even before he resurfaced. But he has done an excellent job of drowning out historic levels of noise and impacting the game in a variety of ways while playing mostly within 15 feet. The spark he provides off the bench can be infectious, and even the level of camaraderie his flashes of success have generated could be a key factor as Philly tries to push deep into the postseason.

Philly stays hot in playoff opener
After ending the regular season on a 16-game winning streak, the 76ers keep rolling in the postseason with a 27-point drubbing of the Heat in Game 1.

Fultz delivers in return
After missing the previous 68 games due to injury, Markelle Fultz receives a warm cheer from Philadelphia's fans as he takes the court, then records 10 points and eight assists in a 76ers victory.

Fultz uses nice move on jumper
Markelle Fultz goes between the legs and then puts up a sweet hook shot to extend the 76ers' lead.

Fultz floats in bucket after nice moves
Markelle Fultz spins toward the basket, steps back and floats in a turnaround jumper.

Fultz attempts first 3-pointer of NBA career
After recovering from a shoulder ailment for the majority of the season, rookie Markelle Fultz hoists his first NBA career 3-pointer.

Fultz draws foul on driving layup
Markelle Fultz drives to the basket and makes a lay-in while drawing contact for a chance at a 3-point play.

Fultz puts Clarkson in the spin cycle
Markelle Fultz puts some moves on Jordan Clarkson to inch closer to the hoop for a second-half bucket.