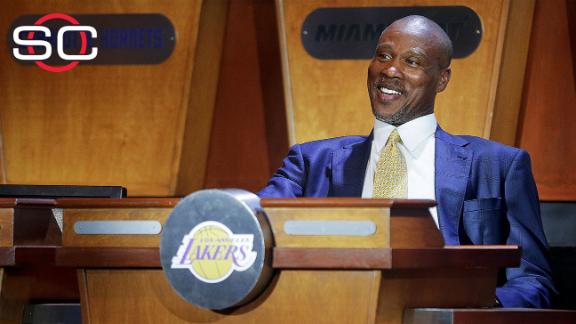 NEW YORK -- Representatives from the two teams sat side by side on the first of three rows, sharing a small table draped in black cloth. Just a few feet in front of the two well-suited men, in a clear glass drum about the size of an office water cooler, 14 ping-pong balls danced like popcorn in a microwave.

The seating arrangement wasn't happenstance. Rather, it was based on record, and since the 76ers finished with the league's third-worst record while Lakers' finished with the fourth-worst, they were paired up.

But the mere image of them sitting a few inches apart truly symbolized -- and no doubt significantly heightened -- the already delicious drama between both teams entering Tuesday night's 2015 NBA draft lottery, held at the New York Hilton Midtown.

After all, if those white spheres bounced a certain way, the 76ers were going to swipe the Lakers' first-round pick, leaving them with nothing to show for the worst season in franchise history -- a disastrous scenario for the Lakers by any measure.

Both men seemed cordial after taking their seats inside the secluded lottery drawing room, a white-walled, green-carpeted conference room two floors below the stage where the picks would be announced on national television an hour later.

They were joined by 12 other representatives from teams who failed to make the playoffs, a dozen media members (including three Lakers reporters who flew in from Los Angeles), a handful of NBA officials and a small video crew with the league.

Guarding the door, as he has done for about two decades, was Clifford Cooper, a private consultant working security for the NBA. No one has tried to get past him to get the word out about the lottery's outcome before it's aired on television -- not that they would have much luck. Cooper spent nearly four decades working in law enforcement in New York City, retiring as Detective First Grade, and he once slapped handcuffs on notorious gangster John Gotti during an arrest.

On the left wall, eight large, white boards listed 1,001 possible four-ball combinations. The worse a team's record, the more combinations it had been assigned. If its combination came up first, then it won the lottery and the top pick. The Lakers had 119 combinations as ammunition.

Black tried to keep calm, but he feared the worst.

"I've been a nervous wreck," he said.

He said he hadn't slept in three nights thanks in part to constant jackhammering and an elevator near his hotel room here that kept dinging as it delivered people to his floor at all hours.

As he tossed and turned, he thought about what would happen if the Lakers fell out of the top five altogether, meaning their pick went to the 76ers as part of the Steve Nash trade.

"It's been on my mind the whole time I've been here," he said.

There was about a 17 percent chance of that situation occurring, but it was still enough to make the Lakers and all their fans sweat, especially after the Lakers twice beat the 76ers in the regular season, wins those same fans worried would come back to haunt their team on Tuesday.

Before Black entered the room, he spoke to Lakers coach Byron Scott, who was representing the team on stage. He told him he hoped when they saw each other again in an hour and a half, they would share a big hug.

Black wore a purple-striped tie, a dark charcoal gray suit and his ring from the Lakers' 2001 championship. "I never wear rings," he pointed out. But he said he chose that one because of the Lakers' dominance that postseason, going 15-1 en route to the second of three consecutive titles. And just who did the Lakers beat in the Finals that year? Why, the 76ers, of course, the same team they were up against Tuesday night.

If it didn't, he joked that he would throw it in the East River.

Air pushed the balls around the drum designed by a company that makes state lottery machines. After 20 seconds, Kyle Yelencsics, an associate coordinator with the NBA, clicked a purple stopwatch in his right hand and raised his left arm.

Then Lou DiSabatino, the NBA's vice president of events and attractions, pulled a small lever, causing one of the balls to be sucked up through a vertical tube to an opening.

After three more intervals, each lasting 10 seconds, a four-ball combination gave the Minnesota Timberwolves what they had the biggest odds (25 percent) of securing after finishing with the NBA's worst record: the top overall pick in the June 25 draft.

The balls were placed back into the drum, a switch was flipped, a whirring sound again filled the rather quiet room, and the process was repeated to determine the second pick.

The next four numbers were read aloud one at a time, and Black, using an official NBA pen, scribbled them in black ink onto a white pad of paper: 6-8-4-11.

That combination belonged to the Lakers, and it gave them the second overall pick.

Black immediately leaned back in his chair, sighed and a huge grin spread across his face. It appeared as though a mountain of pressure had melted off his shoulders, and he clapped Shron on the back.

"Thanks! Sorry, but you're not getting our pick," Black shot back with glee.

Well, not this year anyway. The Lakers' first-round pick in 2016 will go to the 76ers unless it's in the top three in the lottery.

Later, 76ers general manager Sam Hinkie, who acquired the Lakers' pick in a three-team February deal that shipped out 2014 Rookie of the Year Michael Carter-Williams, downplayed the evening's outcome.

"I said the day we traded for the Lakers pick, we anticipated they'd get a top-three pick," Hinkie said. "And they did. Good for them."

Once the third overall pick was determined, the process, which lasted maybe five minutes, was over, as the rest of the first round was determined by inverse order of record.

Then Black bounded out of his chair, smiling from ear to ear.

Cletus Lewis, the Detroit Pistons' Director of Public Relations, sat behind Black and wished him congratulations. Black clapped Lewis on the back, then gave a hearty handshake to Oklahoma City Thunder general manager Sam Presti, seated nearby.

"Whew!" Black said, wiping his hand across his brow.

The happiest man in the room received more congratulations and shook more hands than a politician. He had been in the same situation a year ago, representing the Lakers inside the lottery drawing room, this time held in Times Square, but the situation was drastically different.

"Last year, we knew we were getting a pick," he said.

And the pick they got -- seventh -- was used to draft power forward Julius Randle out of Kentucky.

But this year, they risked coming up empty.

"The ring came through!" he added, giving it a kiss.

Pat Williams knows a little about luck. The Orlando Magic executive, who was also in drawing room, is the most successful lottery participant in the event's history, winning three times with the Magic and once with the 76ers.

But the lottery is unfamiliar territory for the Lakers, a franchise with more NBA championships (16) than all the other 13 teams in the drawing room combined (13).

In fact, Tuesday marked just the Lakers' fourth appearance since the lottery was created 30 years ago, the second-fewest in the NBA behind San Antonio (three).

The other 13 teams in the room Tuesday, by comparison, had combined for 163 lottery appearances.

Williams soon called over to Black, inviting him to sit next to him.

"All the pressure in the world was on you," Williams told Black as he wrapped his arm around a friend for the past three decades. "You kept it pretty cool over there."

"This was a huge, huge night for the Lakers," Williams said. "Huge, huge."

All that was left was for the picks to be announced.

Everyone in the room gathered near a flat-screen television in the left corner, already knowing the results about to be broadcast to the world.

Black leaned back in his chair still in the front row, relaxed and still smiling. Later, he'd collect the pen he used to write down the numbers that earned the Lakers their second pick, as well as the ping-pong balls that gave them good fortune -- all keepsakes from a memorable night.

On stage, Scott, wearing a gray suit and yellow tie, remained calm as the picks were read aloud, even as it became clear that not only were the Lakers going to keep their pick, but might even be moving up.

Scott said he and ex-Lakers teammate Vlade Divac, who was on stage representing the Sacramento Kings, had talked before the event and said they hoped the Kings and Lakers ended up with the top two picks in any order.

The Kings ended up with the sixth pick, then after the fourth pick was announced and the Lakers were still alive, Scott looked back at Divac, the Kings' vice president of Basketball and Franchise Operations, smiled and shot him a quick wink.

Even as concerns grew that the Lakers could lose their pick because they won a few too many games late in the season, Scott said he wasn't nervous.

He also had a specific number in mind, one his friends and others at the Equinox gym in Santa Monica had been telling him for weeks: two.

"Everybody at my gym was saying, 'You're going to get the second pick,'" Scott said. "I said, 'Well, I want the first, but the second one wouldn't be bad.'"

Sure enough, that's how it worked out.

"I'm sure when I go back to the gym in L.A., I'm going to have all those people come up and say, 'I told you,'" Scott joked after leaving the stage. "So I'm going to have to hear that crap for another week or two, too."

But make no mistake, Scott was as happy as Black and all Lakers fans.

After all, the Lakers had worried that they might be jumped over by two teams in the lottery, thus meaning they'd fall to the sixth pick and lose it to the 76ers.

Instead, the Lakers were the only lottery team to move up in the draft, jumping up two picks, from No. 4 to No. 2.

"Big-time night for us," Scott said. "I think this is obviously a step in the right direction for the franchise and the process of being back to where we know we should be in the next year or so."

Scott thought back to all the questions he faced about tanking throughout the season. He always said karma would come into play, and that you could only ask your players to play hard, try to win games and then whatever happens, happens.

"It's the same thing with the lottery," he said. "I think we got good fortune because we did accept it that way and we went out and tried to play every game to win. I think this is a little bit of that reward. Now, the real work starts."

Scott declined to say who the Lakers will take with the second overall pick, but it appears as though a franchise with a storied legacy of dominant big men will add another: Duke's Jahlil Okafor or Kentucky's Karl-Anthony Towns.

The Lakers, who also have the 27th and 34th overall picks in the draft, will soon begin bringing in prospects to work them out, Scott said.

"We need help in a lot of different areas, and hopefully we can take care of all those needs with those three picks," Scott said. "We're excited about that."

But more than anything, there was simply relief surrounding a franchise that has had so much go wrong lately -- and feared that trend would continue Tuesday.

Finally, after two of the worst seasons in Lakers history, something bounced their way: four ping-pong balls.