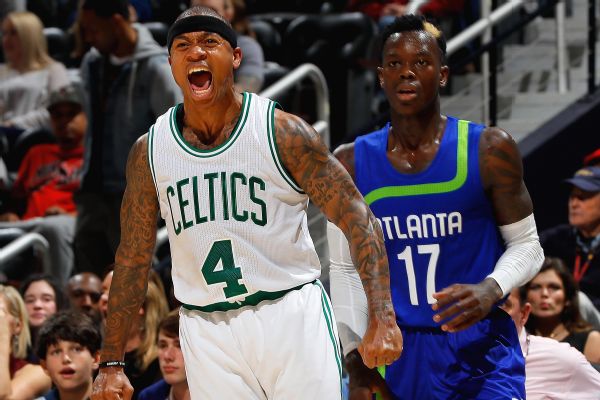 WALTHAM, Mass. -- Boston Celtics guard Isaiah Thomas fired back at Atlanta Hawks guard Dennis Schroder after Schroder suggested that Thomas cursed at his mother and trash-talked his family during Friday's game in Atlanta.

"I don't talk about nobody's moms. I don't cuss at nobody's moms," Thomas said. "And I don't talk about people's families. So whatever he said, that's a 100 percent lie. And he knows that. Because I always say keep it hoop. When it comes to basketball I talk about basketball. And I'm going to trash talk, and I'm going to compete. I'm going to do whatever I can to make my team win a game. But I don't bring parents in it. I don't bring family. I don't even know his mom to curse at her like he said I did, or whatever he's lying about.

"From this point on I don't even want to talk about Dennis Schroder because he's not even on the level that I'm trying to be on. And I'm not even focused on him anymore."

Thomas and Schroder have a history dating back to last year's playoffs when Thomas hit Schroder in the head on a play that was later upgraded to a flagrant foul. After Friday's game, Schroder told reporters that Thomas spoke ill of his family.

"I'm playing basketball. If he think that he got to curse at my mom or say some dumb stuff about my family, that has nothing to do with basketball, that's his choice," said Schroder. "I've got too much class for that."

Thomas replied to a Hawks beat writer on Twitter denying the allegations on Friday but asked about Schroder at Boston's afternoon practice on Sunday, Thomas defended himself while eviscerating Schroder.

"It's disrespectful to my character because I don't ever go there," said Thomas. "And my mom called me that night, too, mad and saying, 'Why would you?' And she knows I don't go there. Like I said, when it comes to basketball, it's strictly basketball. It's not about anybody's family or anybody's parents because I wouldn't want them to do that to mine."

Thomas scored 13 of his team-high 28 points in the fourth quarter of Boston's 103-101 win over the Hawks on Friday night.