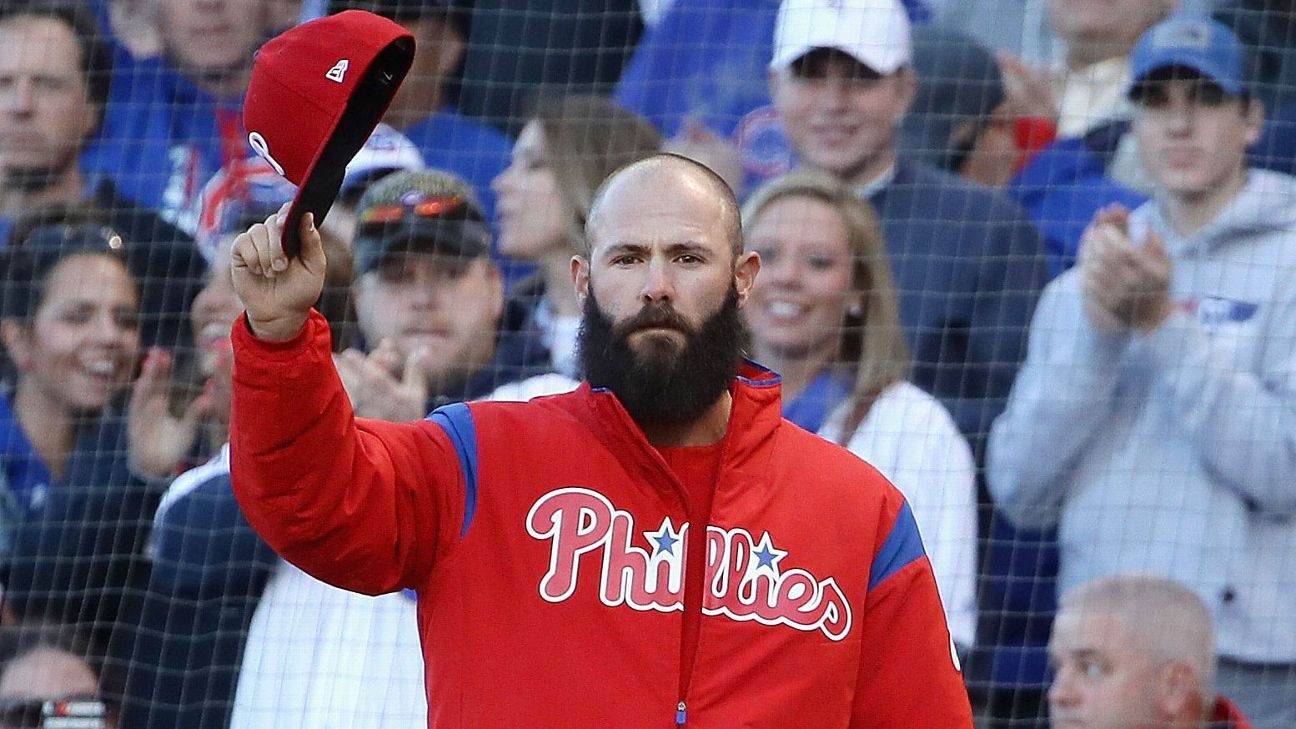 CHICAGO -- In his much anticipated return to Wrigley Field, former Chicago Cubs star pitcher Jake Arrietawas honored Tuesday with a video tribute between the first and second innings, which led to a standing ovation.

Arrieta, who isn't scheduled to pitch in the three-game series, said before the game he had no regrets with his free-agency decision, which landed him with the Philadelphia Phillies.

"It was a very chaotic offseason for free agents," Arrieta said to a throng of reporters. "When Theo [Epstein] called it seemed like it could be a possibility. [But] the way it all went down, I was leaning more and more to the side of probably not returning to Chicago. That's just the way it worked out."

Epstein made a last-minute phone call to Arrieta in early February, not long before the Cubs signed Yu Darvish to a six-year, $126 million deal. Arrieta's camp was more interested in something like Jon Lester's six-year, $155 million deal, which he signed before 2015, but the Cubs wouldn't go higher than what they gave Darvish.

A month later, Arrieta signed with the Phillies for three years and $75 million, a smaller total package but with a higher annual value than Darvish's deal.

"A lot of guys wear different uniforms throughout their careers, and this just happens to be one of those cases," Arrieta said. "I don't think either side is upset or bitter about what happened throughout my career here. There definitely was a possibility, but business on their end, business on our end, worked out different ways."

As soon as the season started, the comparisons between the two pitchers began. Arrieta has had the upper hand over the first two months, while Darvish has struggled and is on the disabled list with tendinitis in his pitching arm.

Arrieta was also asked about Darvish but took the high road.

"We all know he wants to do better than he has," Arrieta said. "That's just the competitor he is. I hope he does perform well for these guys."

Arrieta had dinner with some of his former teammates on Monday while soaking in his return to Chicago. His memorable five-year stint with the Cubs included the 2015 NL Cy Young Award, two no-hitters and multiple wins in the postseason, including during the World Series in 2016.

"Fans were appreciative of what we were able to create here over the years from the end of 2013 up until last season," Arrieta said. "Everybody was geared to win. That was the ultimate goal. Just exceptional what we were able to create. ... It was a really special time to be a Cub."
Report a correction or typo
Related topics:
sportsespnmlbjake arrietareunionwrigley fieldvideophiladelphia philliesreturncheerstributefans
Copyright © 2021 ESPN Internet Ventures. All rights reserved.
More Videos
From CNN Newsource affiliates
TOP STORIES