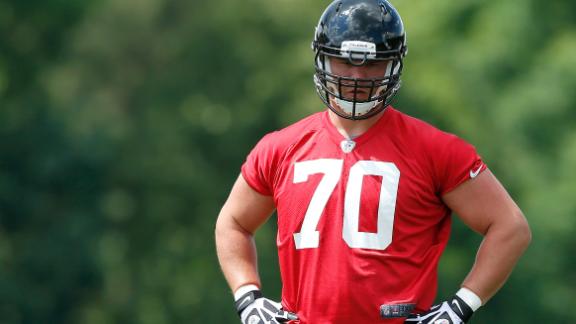 ESPN
By Vaughn McClure
The Atlanta Falcons have lost starting left tackle Sam Baker for the season with a torn patellar tendon, and as a result rookie right tackle Jake Matthews said he is ready to switch to left tackle.

Baker injured his right knee during the second quarter of Saturday's 32-7 preseason loss to the Houston Texans. The Falcons announced Sunday that Baker will miss the rest of the season after tests determined he suffered a torn patellar tendon. The former first-round pick underwent season-ending patella surgery on his left knee last season and missed a total of 12 games.

Matthews, this year's sixth-overall pick, came to the Falcons as a right tackle but was anticipated to be the left tackle of the future. The future seems to be now.

"I'll do it," Matthews told ESPN.com of moving to left tackle. "That's what they drafted me for: to come here and play wherever. And something I take a lot of pride in is my versatility and being able to play on either side. If they ask me to move over, I'll be happy to do it."

On Saturday Matthews wasn't immediately aware of Baker's status, but expressed his feelings about the injury.

Matthews played left tackle at Texas A&M last season so any transition should be natural. He felt like he matured from Week 1 to Week 2 in the preseason.

"I thought I got better," Matthews said of facing the Texans. "I thought I did good things. I definitely did better than the first game. I felt more comfortable. I've just got to keep working. I've got to check that tape and keep getting better."

Coach Mike Smith was hesitant to "speculate" about moving Matthews.

"We would have a number of options," Smith said. "Again, our No. 1 goal would be to put the five best offensive linemen out there. We obviously know that he is one of the five best because he is a starter. Is he our best left tackle, our best option? That is something that we will have to determine if we have to address that."

If the Falcons indeed move Matthews to left tackle, as expected, then either Lamar Holmes or Ryan Schraeder will take his place on the right side, at least in the interim. The best option at right tackle might be veteran newcomer Gabe Carimi, but Carimi is nursing an ankle injury that kept him out of the first two preseason games.

Carimi impressed the coaches throughout camp with his ability to play right tackle and both guard spots.

As for Holmes, he started 15 games last season and played both tackle spots following Baker's injury. Holmes had a bad offseason but has improved daily in training camp.

"Ever since we got Coach [Mike] Tice, Coach Tice has brought different elements to my game," Holmes said. "He's showed me a couple of different things that I can do with my pass sets. He's helping me add tools to my toolbox."

It remains unclear if the Falcons plan to add another veteran tackle to the mix.

As for Baker, a medical source said a significant injury to the patellofemoral mechanism typically is just as challenging as rehabbing from an ACL tear.