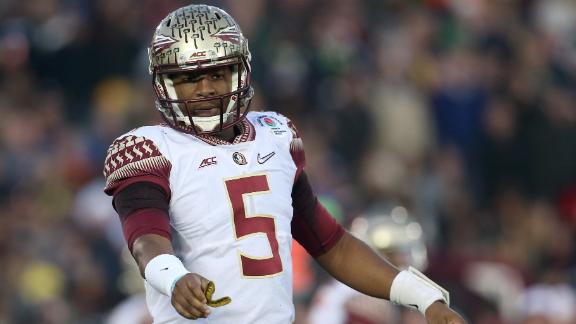 Florida State quarterback Jameis Winston has undergone specific testing to determine why he is showing weakness in his throwing shoulder that was discovered during the NFL combine medical exams, according to team and league sources.

Sources said Winston underwent electromyography to study a weakness in his shoulder that often can be caused by a nerve problem and can be treated through therapy, if necessary.

No other specifics were provided by the sources. Winston spoke to the media Friday afternoon and said his shoulder is healthy and he plans to throw Saturday.

"I got the same shoulder I done had the last two years at Florida State," Winston said when asked whether he was experiencing any discomfort.

Winston's planned media session Thursday was postponed for medical testing at a nearby hospital, according to a source.

"I had an MRI [on Thursday], just like everyone else," Winston said. "I've been playing football for, since I was 4 years old, and my shoulder has been fine."

It is not unusual for players to have medical concerns re-examined with expansive testing at the combine. Winston not only has played quarterback at Florida State but also was a vital member of the Seminoles' baseball team, primarily as a relief pitcher, and that may have contributed to the extra attention to Winston's shoulder.

Winston andOregon quarterback Marcus Mariotaare considered the top candidates to be selected No. 1 overall in this year's draft.

Information from ESPN.com's Jeff Legwold contributed to this report.

Jameis Winston Tests For Arm Weakness
Jameis Winston has undergone testing for weakness in his throwing arm ahead of the NFL combine.