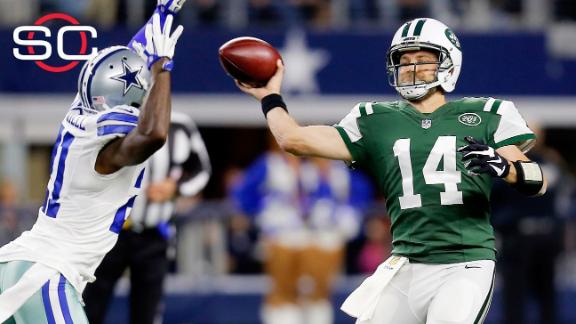 ARLINGTON, Texas -- Dallas Cowboys coach Jason Garrett was not ready to name Kellen Moore the starting quarterback for the final two games after Saturday's 19-16 loss to the New York Jets.

The Cowboys were eliminated from playoff contention with the loss, falling to 4-10 on the season.

Moore replaced Matt Cassel in the second quarter and completed 15 of 25 passes for 158 yards with one touchdown and three interceptions. He became the fourth quarterback the Cowboys have used this season, joining Tony Romo, Brandon Weeden and Cassel.

"We'll go back, and we'll evaluate the tape, and we'll make the determinations and really throw out a roster as to who we want to play and how we want to play it," Garrett said. "Our focus is to win a ballgame, and the byproduct when you get to this time of the season with where we are, there's an opportunity to evaluate every player."

Cassel was pulled after he completed three of eight passes for 37 yards and a horrendous interception. He was also sacked once. On the turnover, Cassel wisely did not throw a quick screen to Cole Beasley after a Jets defender jumped the route, but Cassel stumbled as he turned away and was unable to get enough on the pass, which was intercepted byDarrelle Revis.

"Unfortunately, it was the ultimate no-no at the quarterback position," Cassel said. "When something's not there, you throw it away, and I was trying to do that. Unfortunately, I didn't get enough on it, and it becomes the worst play I've ever had. Then we had two three-and-outs. They made a decision to go a different direction, and I don't blame them at that point, just considering that we had not done much. Would I have loved to stay in and continued to battle? Of course."

Moore's first completion lost a yard. His second pass was intercepted. On his third drive, he directed the Cowboys on a 55-yard drive that ended with a 10-yard touchdown pass to Dez Bryant that gave the Cowboys a 10-9 lead.

"If you're called upon, you have to be ready," Moore said of his first action in four seasons in the NFL. "I felt good. I felt like the communication was pretty good."

On the Cowboys' first drive of the second half, he was intercepted in the end zone while forcing a throw to Bryant.

"That one was really bad, I think, just because we left points there," Moore said. "I was waiting too long. Usually you have a clock in your head, and when that buzzer goes off, it's time to get out of there. I obviously held on to it too long."

Moore delivered a game-tying drive in the fourth quarter, converting one fourth-down pass to Beasley. But the chances of a dream ending or even a tying field goal attempt were wiped out when Moore's third pass was intercepted with 11 seconds to play.

Cowboys owner and general manager Jerry Jones had second-guessed the team's decision to go with Weeden as Romo's backup at the start of the season, but he would not second-guess whether the coaches should have gone to Moore sooner.

"He has a lot of poise," Jones said. "He really knows the offense, not to say that Cassel didn't, but he has been in it more than Cassel has. He does have a better understanding. It's obvious that he has the instincts, very good instincts."