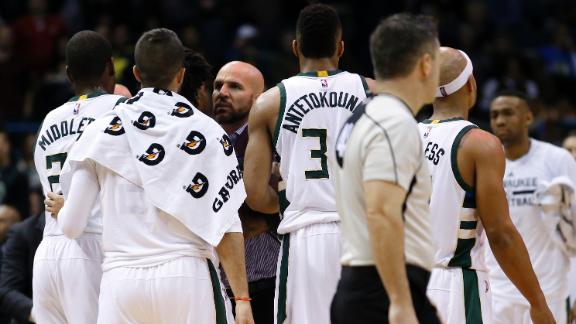 Milwaukee Bucks coach Jason Kidd was suspended for one game without pay after swiping the ball away from a referee during Wednesday's game against the Sacramento Kings, the NBA announced Friday.

The league office punished Kidd for "aggressively pursuing and confronting a game official, slapping the ball out of his hands and not leaving the court in a timely manner upon his ejection," according to a statement from NBA executive vice president of basketball operations Kiki Vandeweghe.

He was ejected with 1:49 left in the Bucks' 129-118 loss after slapping the ball out of referee Zach Zarba's hand. Kidd had to be restrained by O.J. Mayo and an assistant coach before being escorted to the locker room.

Kidd said he was sticking up for himself and protecting his players before he was tossed.

"I walked all the way down to get a timeout," Kidd said, "and then we had our discussion. He gave me the T.

"From there, I'm trying to protect my guys. Understanding we felt we were getting fouled and the whistle wasn't being blown. What happens in this league, you have to stand up for yourself, and my job is to protect those young guys."

Kidd wasn't the only person fired up Wednesday. Players from the Bucks and Kings were involved in a heated verbal exchange in the tunnel after the game.

Information from ESPN's Marc Stein and The Associated Press contributed to this report.

Jason Kidd suspended one game for outburst
Amin Elhassan breaks down the league's decision to suspend Bucks coach Jason Kidd for one game without pay after Kidd "aggressively pursued" and slapped the ball away from an official and failed to leave the court in a timely manner.