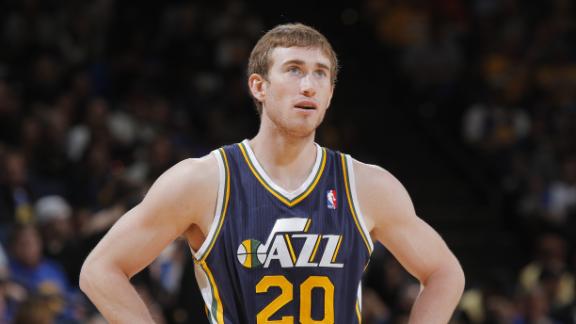 Mark Bartelstein, Hayward's agent, told ESPN.com's Marc Stein that the Jazz made "a great statement" to his client by matching the Hornets' offer.

"We're extremely appreciative to Michael Jordan, Rich Cho, Steve Clifford and the Hornets for wanting Gordon and making Gordon feel like such a critical piece to the team they're building," Bartelstein said. "That's something that's really appreciated by Gordon and myself, not just the contract but the whole presentation that they made.

"But it's always a wonderful thing when your own organization values you so much that they'd match a contract like this. I think it makes a great statement to Gordon about how they feel about him and value him."

The Jazz previously had stated over the past several months that they intended to match any offers for the 24-year-old Hayward, who averaged career highs of 16.2 points, 5.1 rebounds and 5.2 assists last season.

Utah could have kept Hayward off the open market had it negotiated a contract extension with the versatile swingman back in October.

Officially back with the @utahjazz!!!! Wanna thank them and all of #jazznation for believing in me! Lots of work ahead...

- Gordon Hayward (@gordonhayward) July 12, 2014The Jazz had until late Sunday to match the Hornets' maximum offer sheet for the 6-foot-8 small forward.

"As we have said since the start of last season, we have always seen Gordon Hayward as a significant part of the future of the Utah Jazz," general manager Gordon Lindsey said in a statement. "Gordon is a young, multi-faceted player and a high-character individual who we are pleased will remain a member of the Jazz for many years to come."