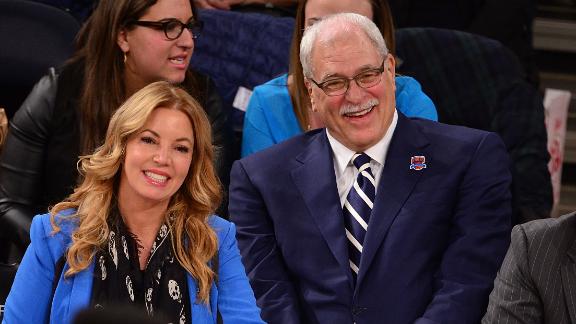 LOS ANGELES -- Lakers president and governor Jeanie Buss made it clear Thursday that the final say, the "final hammer" as Dr. Jerry Buss used to call it, lies with her now.

"I'm the boss," Jeanie Buss said in an hourlong interview on the "Mason and Ireland" show on ESPNLA 710 radio Thursday. "I am responsible ultimately for anything with the team and decisions that are made.

"In my position, I empower people that are in positions to do their jobs. %5BExecutive vice president of player personnel%5D Jim Buss and %5Bgeneral manager%5D Mitch Kupchak are responsible for all basketball decisions. They are empowered to do that. My job is to make sure, as a boss, that I provide them the tools to do the job successfully. But it's up to them to make the day-to-day decisions on how they operate their area of the business."

Buss explained that the six Buss siblings own the team in trust and are its majority owners. Anschutz Entertainment Group, real estate developer Ed Roski and world-renowned doctor Patrick Soon-Shiong are the other investors.

The final say over Lakers operations and decisions belongs to her, however.

"Ultimately I am the one voice. I am that person. I'm at the top of the food chain," Buss said.

On major decisions, such as the recent choice on whether to offer former coach and Buss' fiancée, Phil Jackson, a formal role with the franchise, Buss said that she prefers to "build consensus" among the other siblings and shareholders.

"When it comes to major decisions in any area of the organization, I like to get the blessings of the shareholders -- of which my siblings are the majority -- and build a consensus even if it isn't something that all of them agree on," Buss said. "I like to build a consensus and work as a team."

Buss admitted that "selfishly I wanted it to be in the same office so we could carpool together" but explained that ultimately the six siblings did not envision a role for Jackson with the Lakers that would give him nearly as much power as he now has as president of the New York Knicks, where owner James Dolan made a point of publicly saying that he was ceding final say in basketball matters to Jackson.

"I think people need to understand: It isn't just Phil. They don't need anybody else. Everything is covered," Buss said. "There is no additional need for anybody to come in. Jimmy and Mitch have a like mind in how they see the game and what they want to accomplish with this team and they have it under control. They don't need another voice, whether that's Phil or whoever. It isn't about Phil; they don't need another voice, they've got it covered. I understand that and I respect that and I'm happy for them."

Buss said that she has great faith in her brother and Kupchak to turn the franchise around next season and has been assured that there is reason for optimism in both the draft -- where the Lakers will have a lottery pick for the first time since 2006 -- and free agency.

"I have faith that Jimmy knows what he's doing," Buss said. "He learned under my dad. He's got a certain style of basketball that he wants to see this team play."

That faith will be put to the test in free agency this summer and next, of course, when Kupchak and Jim Buss hope to recruit a great player to come to the Lakers and help the franchise rebuild.

When asked whether the Lakers had ceded any of that ability to recruit those types of players by passing on Jackson, Jeanie Buss strongly disagreed.

"I think the Lakers are a legacy franchise," she said. "Players know when they come here, this is the ultimate platform. They have to want to play in the style that this team is being built as. It's got to fit for the free agent. I don't think a free agent is not going to consider the Lakers. I'm not worried about that in any way, shape or form."

Buss said she believed it was important to continue to empower her brother and Kupchak to do their jobs and give them whatever resources they need to be successful. If they were ultimately unsuccessful, however, she said she does have the power to make changes.

"In my position, I can make changes," she said. "I can make changes across the entire organization. If John Ireland doesn't do his job, in his radio broadcast play-by-play, then we would make that change.

"If the Laker Girls drop down in caliber and couldn't do a dance number, then we'd make changes there. I think you should have that same confidence in our entire organization, including basketball."

She also said she "absolutely" agreed with the decision to give star Kobe Bryant's a two-year, $48.5 million contract this fall that keeps him as the highest paid player in the NBA.

"I believe that Kobe will come back from this injury and he will be the Kobe that we always know he can be," she said. "He has so many different degrees to his game. I'm confident that he will be productive in the next two seasons."

"You can judge that years from now when you look back," she said. "I think he will be a huge contributor to this team going forward, in terms of mentoring young players, in terms of attracting other free agents who are like minded, that want to play, that want to win, that want to be successful. He's an asset, I don't know how anybody can doubt that, and he did take less money than he would technically have been entitled to."

Buss said she sympathized with fans who were frustrated with this season, noting that "you never want to waste a season" or be eliminated from the playoffs in March. Ratings on Laker television and radio broadcasts are off, and she often gets angry emails from fans.

"It's a challenge, but I think we have to be optimistic and look at our position," she said. "As we go forward, we're going to have all those opportunities. We're going to be a team that's in the lottery. We're going to find out our draft placement. We're going to get excited about who we're bringing in. And we're going to be a player in free agency because this is the best place to play in the NBA, bar none. I don't think anybody tells a better story of a franchise and to bring a player to come in here and be part of something as we're building to the future."

Buss also revealed that the NBA asked her and Jackson to sign a document dealing with potential conflicts of interest.

"There's a document that we have to sign that deals with conflicts of interest," she said. "I don't think there's been a couple like this -- there's been brothers, the Paxson brothers running two different teams, the Colangelos -- father and son, running two different teams, so it's not that unusual. But I understand, I'll sign it -- I don't see any problem going forward."