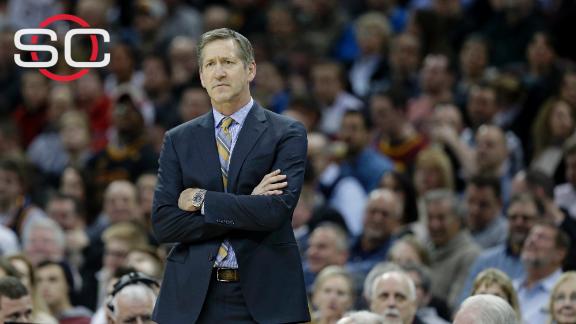 Hornacek, 53, will be the Knicks' fifth coach in six seasons. He will be the second coach Jackson has hired since taking over as team president late in the 2013-14 season.

"Jeff has a tremendous basketball acumen and possesses strong leadership skills," Jackson said in a statement. "During his career as both a player and coach, he has demonstrated the ability to elevate the game."

Hornacek agreed to a three-year, $15 million contract, sources confirmed to ESPN on Wednesday. There is no fourth-year option on Hornacek's deal, sources say.

"I am extremely excited and honored to be the next coach of such an historic franchise," said Hornacek, who will be introduced at a press conference at the team facility on Friday afternoon. "I look forward to working with Phil -- a coach and teacher of the game I have admired for many years -- and collaborating with him and our staff to take this team to the level that Knicks fans expect."

Hornacek coached the Suns for 2 seasons and was fired in February after the team lost 19 of 21 games and 14 straight on the road. In Hornacek's first season in Phoenix, he led the club to 48 wins, more than doubling most Las Vegas-predicted win totals and finishing second in coach of the year voting to San Antonio's Gregg Popovich.

Amid a rash of injuries and chemistry issues, the Suns had a 14-35 record and had fallen into 13th place in the 15-team West when Phoenix cut ties with him.

Hornacek spent the first six years of his 14-year NBA playing career with the Suns, making his only All-Star Game in 1992. He played for the Jazz from 1993-94 to 1999-2000. After retirement, Hornacek spent several years away from the game to be with his family, but he returned to Utah in 2007 in an advisory role to help Andrei Kirilenko with his shot and eventually became a full-time assistant with the Jazz.

The length of Hornacek's contract, earlier reported by The Vertical, matches the years remaining on Jackson's contract with the Knicks.

Jackson was fond of Hornacek as a player. As a shooting guard with the Utah Jazz, Hornacek competed against Jackson's Chicago Bulls in two NBA Finals.

Hornacek will inherit a club that won 49 games in the past two seasons combined.

Jackson and the Knicks hope to build a team that can contend for a playoff spot around rookie Kristaps Porzingis and veteran Carmelo Anthony. The club does not have a first-round draft pick this year but projects to have at least $19 million to spend in free agency.

The organization hopes that Hornacek's presence can aid its pitch to free agents.

Jackson, Hornacek on Knicks' offense
Phil Jackson explains the character traits that made Jeff Hornacek an attractive candidate to coach the Knicks while Hornacek discusses how the triangle will still be a part of the team's offense.