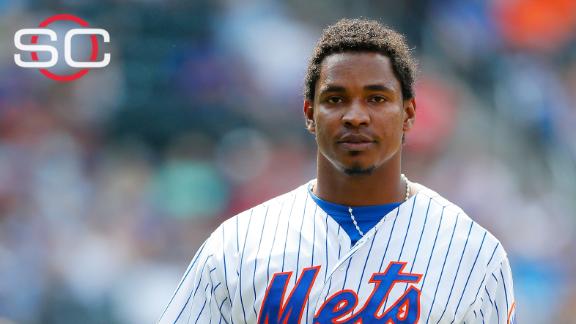 MLB said Mejia tested positive for boldenone, which athletes have used to increase muscle mass and once was popular for use in horse racing, and that the right-hander also is permanently suspended from playing minor league baseball.

It marked his third positive PED test in the past year, triggering the lifetime expulsion.

Mejia, 26, may apply to commissioner Rob Manfred for reinstatement in one year. If reinstated, he would have to sit out a minimum of two years before being able to pitch again in the majors. If an application is made and denied, Mejia could ask baseball's arbitrator to end the ban, claiming the penalty is without "just cause.'' The arbitrator cannot reduce the ban to less than two years.

Mejia told Dominican sports journalist Hector Gomez in Spanish: "It is not like they say. I am sure that I did not use anything."

Mejia had been starting with Licey in the Dominican Republic during winter ball.

MLB suspensions may be honored in leagues in other countries such as Japan, South Korea and Mexico, but that is each league's decision. However, suspended players are allowed to compete in winter leagues, such as in Mejia's native Dominican Republic. Independent leagues are not compelled to honor MLB suspensions but may choose to do so.

Mejia becomes the first major or minor league player to receive a permanent suspension under MLB's drug program.Texas Rangers outfielder Josh Hamilton,then in the minor leagues, was suspended several times for drugs of abuse from 2003-05 but was allowed to return each time. During a time when there was not a drug agreement, Steve Howe was suspended for life by Commissioner Fay Vincent in 1992 after the pitcher's seventh drug- or alcohol-related incident. Arbitrator George Nicolau said doctors concluded Howe suffered from attention deficit hyperactive disorder and cut the suspension to time served, which was 119 days.

"We were deeply disappointed to hear that Jenrry has again violated Major League Baseball's Joint Drug Prevention and Treatment Program," the Mets said Friday in a statement. "We fully support MLB's policy toward eliminating performance enhancing substances from the sport. As per the Joint Drug Program, we will have no further comment on this suspension."

Mejia originally was handed an 80-game suspension in April for a positive test for stanozolol, an anabolic steroid. In July, three weeks and seven appearances into his return with the Mets, he was suspended 162 games for testing positive for both stanozolol and boldenone. The second positive test actually occurred while Mejia was still serving the first suspension.

The Mets nonetheless decided to tender Mejia a contract in December for the 2016 season. Mets officials reasoned that despite Mejia letting down the team, he was worth bringing back to the organization because he would receive only a prorated portion of his salary -- less than $1 million -- and be eligible for the postseason.

Mejia had 99 games left to serve on his second suspension and had been due to return to the Mets in late July.