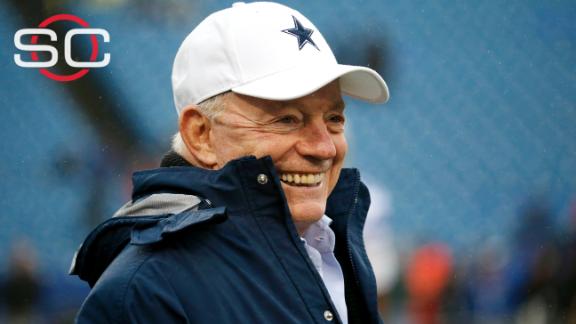 At 4-11, the Dallas Cowboys are one of the NFL's most disappointing teams this season. But owner and general manager Jerry Jones on Tuesday said he doesn't plan on any major changes among coaches or players going into 2016.

"The bottom line is that I can make you a strong case where you should line them up and go again with your hand," Jones said on 105.3 The Fan in Dallas. "But under any circumstances, you have to do what you have to do.

"And so just change for change sake? No, you're not going to have that because I believe that we're closer than this record indicates."

Jones still expects offseason adjustments via the draft and free agency and possible tweaks to the coaching staff -- but nothing different from the norm.

"We're in relatively good shape under the salary cap, and we ought to look at that and change things," Jones said. "Now don't say that that's the highlight of the day -- 'Things are changing' -- because they were going to change anyway. There's at least 20 percent of this roster that changes every year and maybe higher, and so there were going to be those kinds of changes. There's changes on coaching staffs that happen."

Jones didn't want to pin the Cowboys' woes on injuries to quarterback Tony Romo, who twice suffered a broken left collarbone this season. The Cowboys are 1-10 this season in games started by backups Brandon Weeden, Matt Cassel and Kellen Moore.

Jones said he did not have an answer as to why Weeden, who threw two touchdown passes and ran for another in his first start for the Texans, could succeed in Houston after going 0-3 with the Cowboys.

"We should have coached them up enough, done enough things that some of these games that we lost on our way to this record we could have won. You see other teams doing it and then you see another team doing it with a quarterback that left here that couldn't do it."

The Cowboys are not the only team that entered the season with high expectations that has fallen short this year. The Baltimore Ravens and San Diego Chargers are other examples.

Going into the 2014 season, Jones said the Cowboys faced an "uphill battle," and the team finished 12-4. Coming out of training camp this summer, Jones thought he had a better team in 2015.

"I think we're closer, and I say that because when it gets off-balance, when it gets out of kilter, it really goes off the road," Jones said. "And if you look you can see that in a lot of places. ... You realize what a fine line it is when you really got it all humming."

Jones said he thinks he has a team with enough pieces to compete in 2016, provided Romo stays healthy and has an improved backup if called upon.

"I think the thing that motivates me to address it, both short and long term, [is] Romo's relatively short -- three to five [years left] -- and then long term with a prospect that might be a future, is the fact that we're close," Jones said. "You can operate in pretty good in this territory."