Jets QB Ryan Fitzpatrick: Some fans accused me of being greedy 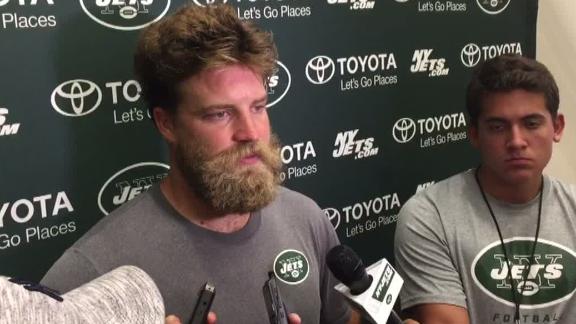 ESPN
By Rich Cimini
FLORHAM PARK, N.J. -- During his long contract stalemate with the New York Jets, Ryan Fitzpatrick visited Arizona, golfed in Nevada and vacationed in Wisconsin. In each place, he was stopped by strangers who wanted to know the latest on his status. It was especially intense in New Jersey, where he lives.

Some fans, Fitzpatrick admitted, accused him of being greedy.

"Everywhere I went, that was a topic of conversation," Fitzpatrick said Saturday after practice. "Some of them were trying to feel it out, and buddy me up to get the answer to what's really going on with the situation. They wanted my agent's number. Some of them were telling me I need to sign, 'stop being so greedy.' Everything in the book was thrown at me. But for the most part, people were pretty respectful about it."

The six-month stalemate ended Wednesday, when the 33-year-old quarterback agreed to a contract that will pay him $12 million for the season.

Technically, it's a two-year contract, but the second year will automatically void five days after the Super Bowl.

Fitzpatrick rejoined the Jets in time for Todd Bowles' first team meeting, and he has participated in all three practices. Some rust was evident in the first practice, but he has settled in nicely, reconnecting with his wide receivers, Brandon Marshall and Eric Decker.

"My arm feels good and my rapport with the guys is still there," said Fitzpatrick, who set the franchise record with 31 touchdown passes last season.

He said there are a "few different wrinkles" in the playbook, but he doesn't think he was hurt by missing the entire offseason.

Fitzpatrick has high expectations for the Jets' offense, which finished 10th in total yards -- its highest ranking since 1998.

"We did some things that were OK last year, but there are a lot of things we can improve on," he said.