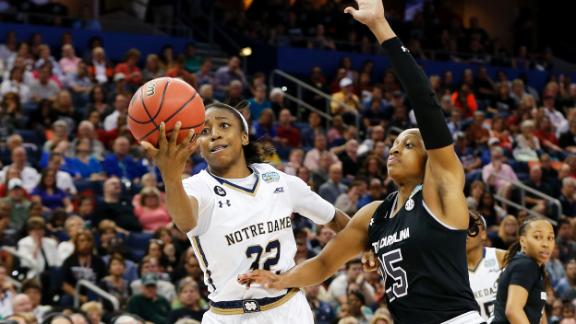 Notre Dame junior Jewell Loyd declared herself eligible for the WNBA draft on Wednesday, a night after the Irish lost 63-53 in the national championship game to UConn.


Loyd could be the top pick in the April 16 WNBA draft and had until Wednesday night to declare. She has until five days before the draft to reconsider her decision. She is eligible to enter the draft because she will be 22 years old at the start of the season.


"I am incredibly grateful for my experience at Notre Dame and the support I have received from Coach (Muffet) McGraw, our staff, my teammates and the entire ND community,'' Loyd said in a statement to The Associated Press. "I have grown as a woman and as a basketball player and I am so thankful to have had the opportunity to be a part of such an inspiring community.''

She finished second in the AP Player of the Year voting to UConn's Breanna Stewart and averaged just over 20 points a game this season.


"We appreciate all that Jewell has done for our program and the University of Notre Dame during her time here,'' Fighting Irish coach Muffet McGraw said. "We understand this was not an easy decision. We wish her nothing but happiness and success at the next level.


"Our focus remains the same as it was moments after Tuesday night's national championship game ended,'' McGraw added. "We plan on building on this year's success, including our fifth straight Final Four, fourth national championship game appearance in five years and fourth conference title in a row, with an outstanding incoming freshman class ranked among the top three in the nation.


"The future is so bright for our program and we couldn't be more excited to get started with our preparations for the 2015-16 season.''


When asked during the Oklahoma City Elite Eight about the possibility of Loyd leaving, McGraw told ESPN, "[Loyd] did come in and say, 'You know, I know I'm allowed to leave now, but I just want to let you know that I'm not.' So we did have that conversation, which put my mind at ease. I was happy."


espnW's Michelle Smith,Graham Hays and The Associated Press contributed to this report.