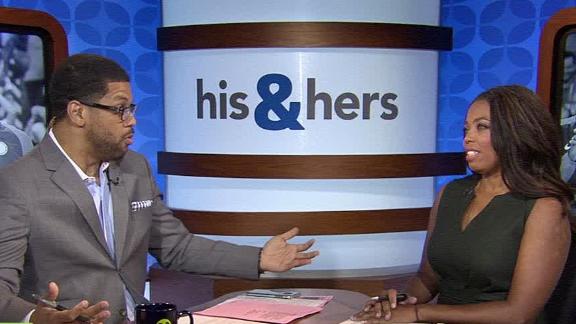 "He's unlikely to win an NBA title,''Syracuse Orangecoach Jim Boeheim said, according to the Syracuse Post-Standard. "He's never been on a team that even had a remote chance of winning an NBA title. As a player, all you can do is try to make your team better andevery team he's been on he's made them a lot better. Denver hadn't done anything prior to him getting there and he took them into the playoffs. They weren't going to beat the Lakers or the Spurs. In those years, they won the championship most of the time."

Anthony, 32, made the playoffs in each of the first 10 seasons of his career. But he has advanced past the first round just twice. Anthony's New York Knicks have missed the postseason for the past three years.

"He wants to win in New York," Boeheim said. "I know the general opinion is if [new additions Joakim] Noah and [Derrick] Rose are healthy then they'll be a better team. It's just a question of if they will be healthy. They've been off and on the last two years. They've both been hurt. I think if both those guys are healthy, it certainly would make a big difference and [Kristaps] Porzingis continuing to progress. If those things happen, they can be better.''

Anthony won an NCAA championship under Boeheim at Syracuse. The veteran college coach has said several times that Anthony would have given himself the best chance to win a title if he'd signed with the Chicago Bulls as a free agent in the summer of 2014 rather than re-signing with the Knicks.

Anthony has said several times over the past few seasons that he's driven by the idea of winning a title in New York. The Knicks last won a championship in 1972-73.

Anthony also recently told ESPN's Marc Stein that if his career ends without an NBA title, he'd still be proud of his accomplishments, which include an NCAA title and three Olympic gold medals.

"Most athletes don't have an opportunity to say that they won a gold medal, better yet three gold medals," Anthony said. "I would be very happy walking away from the game knowing that I've given the game everything I have, knowing I played on a high level at every level: high school, college, won [a championship at Syracuse] in college and possibly three gold medals.